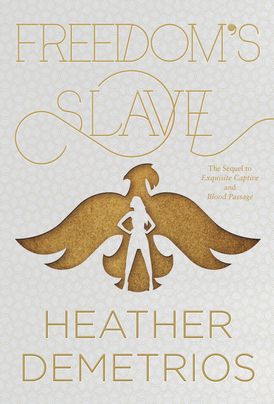 After three long years in exile, Nalia is ready to return to her homeland and sit on the throne that is rightfully hers. But the gods might have other plans. Forced to endure untold horrors on the journey to Arjinna, Nalia learns that it will take more than cutting down the tyrant Calar to get her crown.

Meanwhile, Raif’s return to Arjinna as the commander of the revolution against Calar and her army isn’t as smooth as he’d hoped. Though he has more soldiers than ever before, his love for Nalia is losing him the trust of his comrades . . . and the war. But little does the resistance know that insurrection is brewing among Calar’s own ranks—and from the one person she trusts the most.

Is Nalia and Raif’s enduring love enough to transform and rescue their homeland? Will they be willing to save the realm, no matter the cost?

When Heather Demetrios isn’t traipsing around the world or spending time in imaginary places, she lives with her husband in New York City. Originally from Los Angeles, she now calls the East Coast home. Heather received her MFA in writing for children and young adults from Vermont College of Fine Arts and is a recipient of the PEN New England Susan P. Bloom Discovery Award for her debut young adult novel, Something Real. She is the founder of Live Your What, an organization dedicated to fostering

Other Works by Heather Demetrios