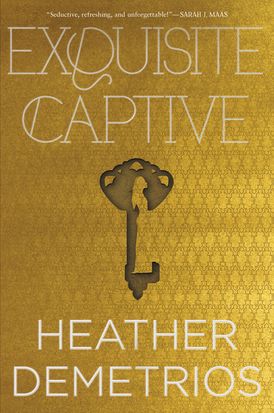 For fans of Laini Taylor’s Daughter of Smoke and Bone series and Leigh Bardugo’s Grisha Trilogy comes the first book in the Dark Caravan Cycle, a modern fantasy-adventure trilogy about a gorgeous, fierce eighteen-year-old jinni who is pitted against two magnetic adversaries, both of whom want her—and need her—to make their wishes come true.

Nalia is a jinni of tremendous ancient power, the only survivor of a coup that killed nearly everyone she loved. Now in hiding on the dark caravan—the lucrative jinni slave trade between Arjinna and Earth, where jinn are forced to grant wishes and obey their human masters’ every command—she’d give almost anything to be free of the golden shackles that bind her to Malek, her handsome, cruel master, and his lavish Hollywood lifestyle. Enter Raif, the enigmatic leader of Arjinna’s revolution and Nalia’s sworn enemy. He promises to release Nalia from her master so she can return to her ravaged homeland and free her imprisoned brother. There’s just one catch: for Raif’s unbinding magic to work, Nalia must gain possession of her bottle . . . and convince the dangerously persuasive Malek that she truly loves him.

“The story unfolds at a swift, even pace, and the worldbuilding is superb; the jinn inhabit an intoxicating, richly realized realm of magic, politics, spirituality and history. Readers will wish they had a jinni to grant them the next book in the series.” — Kirkus Reviews (starred review)

“Exquisite Captive transported me to a world that was beautiful and terrifying, sensuous and dark, and utterly unforgettable. I’ll be haunted by Heather Demetrios’s brilliant and romantic take on modern jinni lore for many nights to come.” — Megan Shepherd, author of The Madman's Daughter

“A rich, unique world, full of characters who blaze as brightly as their tremendous powers—I was ensnared from the very first line! Exquisite Captive is a beautiful and clever reimagining of the mythology of the jinn, and utterly unlike anything I’ve ever read. Seductive, refreshing, and unforgettable!” — Sarah J. Maas, New York Times bestselling author of the Throne of Glass series

When Heather Demetrios isn’t traipsing around the world or spending time in imaginary places, she lives with her husband in New York City. Originally from Los Angeles, she now calls the East Coast home. Heather received her MFA in writing for children and young adults from Vermont College of Fine Arts and is a recipient of the PEN New England Susan P. Bloom Discovery Award for her debut young adult novel, Something Real. She is the founder of Live Your What, an organization dedicated to fostering

Other Works by Heather Demetrios