In the bestselling vein of Guillermo Del Toro and Justin Cronin, the acclaimed author of Chimera and The Hydra Protocol delivers his spectacular breakout novel—an entertaining page-turning zombie epic that is sure to become a classic.

The tattooed plus sign on Finnegan's hand marks him as a Positive. At any time, the zombie virus could explode in his body, turning him from a rational human into a ravenous monster. His only chance of a normal life is to survive the last two years of the potential incubation period. If he reaches his twenty-first birthday without an incident, he'll be cleared.

Until then, Finn must go to a special facility for positives, segregated from society to keep the healthy population safe. But when the military caravan transporting him is attacked, Finn becomes separated. To make it to safety, he must embark on a perilous cross-country journey across an America transformed—a dark and dangerous land populated with heroes, villains, madmen, and hordes of zombies. And though the zombies are everywhere, Finn discovers that the real danger may be his fellow humans.

Mad Max Beyond Thunderdome meets World War Z and I Am Legend in this thrilling tale that has it all: a compelling story, great characters, and explosive action, making Positive the ultimate zombie novel of our time.

“Wow! What a great book. I absolutely devoured it. With POSITIVE, horror master David Wellington has given us a true zombie epic. Sweeping, nuanced, brutal and compelling. It’s David’s best, which is saying a lot.” - Jonathan Maberry, New York Times bestselling author of Predator One and Bits & Pieces on POSITIVE

“One of the best zombie novels I’ve read in years. The heart of the zombie story has always been humanity. Positive is a harrowing, brutal, brilliant look at that heart...and it’s still beating.” - New York Times bestselling author Seanan McGuire on POSITIVE

“Combining action and horror and featuring a sympathetic if naïve hero, this is a great addition to the zombie canon from Wellington. Finn’s journey has an epic scale that seems destined for movie screens. In this postapocalyptic world the horror arises mostly from the violent remnants of humanity.” - Library Journal (starred review) on POSITIVE

“If John Wyndham had written a zombie novel, it might very well have resembled Wellington’s clever apocalyptic thriller….Finn’s personal growth is plausible as he grapples with the ethics of survival, and the story displays an imagination familiar to fans of Wellington’s Chimera.” - Publishers Weekly on POSITIVE

“Wellington’s most ambitious book is also his best, written with a maturity and compassion indicative of a writer who’s found the story he was made to tell. Zombie groupies will eat this one up, but it should also be recommended to readers of all epic-scale fantasy.” - Booklist on POSITIVE

“Positive is an excellent novel for those just starting to explore the post-apocalyptic genre while also a satisfying read for the diehard fans out there that are well versed in the worlds of zombies and the end of the world as we know it.” - New York Journal of Books on POSITIVE 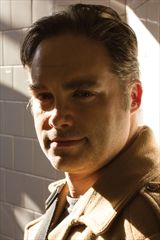 David Wellington lives and works in Brooklyn, New York. He is the author of the Monster Island trilogy of zombie novels; the Thirteen Bullets vampire series; the epic post-apocalyptic novel Positive; and the Jim Chapel missions, including the digital shorts “Minotaur” and “Myrmidon,” and the novels Chimera and The Hydra Protocol.

Other Works by David Wellington

Sidney Sheldon's The Tides of Memory

Woman with a Gun