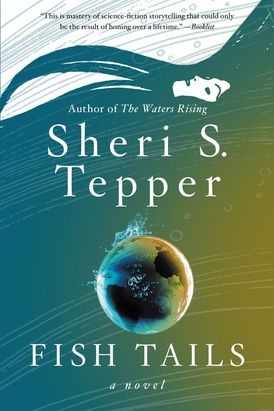 In her 35th novel, science fiction master Sheri S. Tepper boldly weaves together the storylines of eleven of her previous works—from King’s Blood Four (1983) to The Waters Rising (2010).

In Fish Tails, two of Sheri S. Tepper’s beloved characters—Abasio and Xulai (A Plague of Angels and The Waters Rising)—and their children travel from village to village scattered across the sparsely populated land of Tingawa. They are searching for others who might be interested in adopting their sea-dwelling lifestyle.

Along their journey they encounter strange visitors from the far-off world of Lom, characters from Tepper’s nine-book True Game series of novels—Mavin Manyshaped, Jinian Star-eye, and Silkhands the Healer—all of whom have been gathered up by an interfering, time-traveling, rule-breaking do-gooder to do one last good deed on earth before its metamorphosis is complete. For the waters are rising and will soon engulf the entire planet, transforming it utterly and irrevocably.

“Tepper’s themes and messages are cutting, but the anger and sorrow embedded in them are delivered by the author’s enduringly optimistic humanism. This is mastery of science-fiction storytelling that could only be the result of honing over a lifetime.” - Booklist on FISH TAILS

“One of sf’s most distinctive voices.” - Locus on Sheri S. Tepper

“Sheri S. Tepper takes the mental risks that are the lifeblood of science fiction and all imaginative fiction.” - Ursula K. Le Guin on Sheri S. Tepper

“Her novels are the old-fashioned kind, despite their futuristic settings; the kind that wrap you in their embrace, that take over your life, that make the world disappear.” - Village Voice Literary Supplement on Sheri S. Tepper

“This lyrical, beautifully written novel transcends the sum of its parts to become a parable of survival and hope in hopeless times.” - The Guardian on THE WATERS RISING

“Tepper balances pointed criticisms of our era with a calamity that appears to owe far more to Genesis than to science...the writing is slick and crafeully crafted, Xulai has plenty of pluck, and her companions possess a nearly ideal mixture of virtues, flaws, and enthusiasm for redemptive sacrifice.” - Publishers Weekly on THE WATERS RISING

“The Waters Rising delivers a strong, complex story that poses tough questions and demands a new look at the possibilities of the future.” - Wichita Eagle on THE WATERS RISING

“Tepper has developed a dependable following with works that have an epic fantasy feel but that ultimately reveal logically consistent scientific trappings. This work is no exception, a successful blend of dying-earth fantasy and wicked-witch fable.” - Booklist on THE WATERS RISING

“The Waters Rising stands as a thoughtful allegory for environmentalism.” - Iron Mountain Daily News on THE WATERS RISING 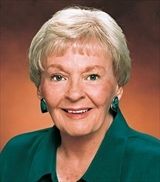 Sheri S. Tepper is the author of more than thirty resoundingly acclaimed novels, including The Waters Rising, The Margarets, The Companions, The Visitor, The Fresco, Singer from the Sea, Six Moon Dance, The Family Tree, Gibbon's Decline and Fall, Shadow's End, A Plague of Angels, Sideshow, and Beauty; numerous novellas; stories; poems; and essays. She lives in Santa Fe, New Mexico.

Other Works by Sheri S. Tepper