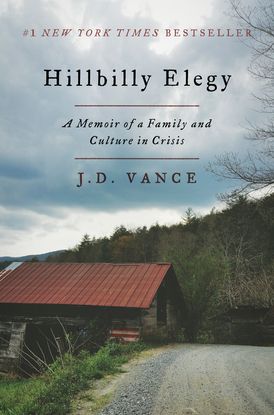 "You will not read a more important book about America this year."—The Economist

From a former marine and Yale Law School graduate, a powerful account of growing up in a poor Rust Belt town that offers a broader, probing look at the struggles of America’s white working class

Hillbilly Elegy is a passionate and personal analysis of a culture in crisis—that of white working-class Americans. The decline of this group, a demographic of our country that has been slowly disintegrating over forty years, has been reported on with growing frequency and alarm, but has never before been written about as searingly from the inside. J. D. Vance tells the true story of what a social, regional, and class decline feels like when you were born with it hung around your neck.

The Vance family story begins hopefully in postwar America. J. D.’s grandparents were “dirt poor and in love,” and moved north from Kentucky’s Appalachia region to Ohio in the hopes of escaping the dreadful poverty around them. They raised a middle-class family, and eventually their grandchild (the author) would graduate from Yale Law School, a conventional marker of their success in achieving generational upward mobility.

But as the family saga of Hillbilly Elegy plays out, we learn that this is only the short, superficial version. Vance’s grandparents, aunt, uncle, sister, and, most of all, his mother, struggled profoundly with the demands of their new middle-class life, and were never able to fully escape the legacy of abuse, alcoholism, poverty, and trauma so characteristic of their part of America. Vance piercingly shows how he himself still carries around the demons of their chaotic family history.

A deeply moving memoir with its share of humor and vividly colorful figures, Hillbilly Elegy is the story of how upward mobility really feels. And it is an urgent and troubling meditation on the loss of the American dream for a large segment of this country.

“[A] compassionate, discerning sociological analysis…Combining thoughtful inquiry with firsthand experience, Mr. Vance has inadvertently provided a civilized reference guide for an uncivilized election, and he’s done so in a vocabulary intelligible to both Democrats and Republicans. Imagine that.” — Jennifer Senior, New York Times

“[Hillbilly Elegy] is a beautiful memoir but it is equally a work of cultural criticism about white working-class America….[Vance] offers a compelling explanation for why it’s so hard for someone who grew up the way he did to make it…a riveting book.” — Wall Street Journal

“[Vance’s] description of the culture he grew up in is essential reading for this moment in history.” — David Brooks, New York Times

“[Hillbilly Elegy] couldn’t have been better timed...a harrowing portrait of much that has gone wrong in America over the past two generations...an honest look at the dysfunction that afflicts too many working-class Americans.” — National Review

"[A]n American classic, an extraordinary testimony to the brokenness of the white working class, but also its strengths. It’s one of the best books I’ve ever read… [T]he most important book of 2016. You cannot understand what’s happening now without first reading J.D. Vance." — Rod Dreher,The American Conservative

“J.D. Vance’s memoir, “Hillbilly Elegy”, offers a starkly honest look at what that shattering of faith feels like for a family who lived through it. You will not read a more important book about America this year.” — The Economist

“The troubles of the working poor are well known to policymakers, but Vance offers an insider’s view of the problem.” — Christianity Today

“Vance movingly recounts the travails of his family.” — Washington Post

“What explains the appeal of Donald Trump? Many pundits have tried to answer this question and fallen short. But J.D. Vance nails it...stunning...intimate...” — Globe and Mail (Toronto)

“[A] new memoir that should be read far and wide.” — Institute of Family Studies

“[An] understated, engaging debut...An unusually timely and deeply affecting view of a social class whose health and economic problems are making headlines in this election year.” — Kirkus Reviews (starred review)

“Both heartbreaking and heartwarming, this memoir is akin to investigative journalism. … A quick and engaging read, this book is well suited to anyone interested in a study of modern America, as Vance’s assertions about Appalachia are far more reaching.” — Library Journal

“Vance compellingly describes the terrible toll that alcoholism, drug abuse, and an unrelenting code of honor took on his family, neither excusing the behavior nor condemning it…The portrait that emerges is a complex one…Unerringly forthright, remarkably insightful, and refreshingly focused, Hillbilly Elegy is the cry of a community in crisis.” — Booklist

To understand the rage and disaffection of America’s working-class whites, look to Greater Appalachia. In HILLBILLY ELEGY, J.D. Vance confronts us with the economic and spiritual travails of this forgotten corner of our country. Here we find women and men who dearly love their country, yet who feel powerless as their way of life is devastated. Never before have I read a memoir so powerful, and so necessary. — Reihan Salam, executive editor, National Review

“A beautifully and powerfully written memoir about the author’s journey from a troubled, addiction-torn Appalachian family to Yale Law School, Hillbilly Elegy is shocking, heartbreaking, gut-wrenching, and hysterically funny. It’s also a profoundly important book, one that opens a window on a part of America usually hidden from view and offers genuine hope in the form of hard-hitting honesty. Hillbilly Elegy announces the arrival of a gifted and utterly original new writer and should be required reading for everyone who cares about what’s really happening in America.” — Amy Chua, New York Times bestselling author of The Battle Hymn of the Tiger Mother

“Elites tend to see our social crisis in terms of ‘stagnation’ or ‘inequality.’ J. D. Vance writes powerfully about the real people who are kept out of sight by academic abstractions.” — Peter Thiel, entrepreneur, investor, and author of Zero to One

J.D. Vance grew up in the Rust Belt city of Middletown, Ohio, and the Appalachian town of Jackson, Kentucky. He enlisted in the Marine Corps after high school and served in Iraq. A graduate of the Ohio State University and Yale Law School, he has contributed to the National Review and the New York Times, and works as an investor at a leading venture capital firm. Vance lives in Columbus, Ohio, with his family.

Other Works by J. D. Vance