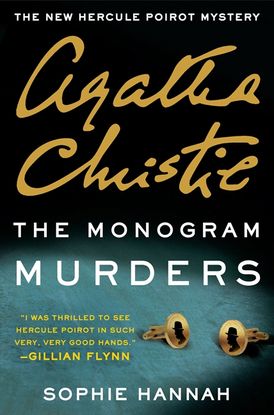 "Equal parts charming and ingenious, dark and quirky and utterly engaging. Reading The Monogram Murders was like returning to a favorite room of a long-lost home" -Gillian Flynn, #1 New York Times bestselling author of Gone Girl

Since the publication of her first novel in 1920, more than two billion copies of Agatha Christie’s books have been sold around the globe. Now, for the first time ever, the guardians of her legacy have approved a brand new novel featuring Dame Agatha’s most beloved creation, Hercule Poirot.

Hercule Poirot's quiet supper in a London coffeehouse is interrupted when a young woman confides to him that she is about to be murdered.  She is terrified – but begs Poirot not to find and punish her killer. Once she is dead, she insists, justice will have been done.

Later that night, Poirot learns that three guests at a fashionable London Hotel have been murdered, and a cufflink has been placed in each one’s mouth. Could there be a connection with the frightened woman? While Poirot struggles to put together the bizarre pieces of the puzzle, the murderer prepares another hotel bedroom for a fourth victim...

“Christie herself, some might say, could do no better.... Enough twists, turns, revelations and suspects to cook up a most satisfying red-herring stew. Literary magic.” - Washington Post

“Does Sophie Hannah’s Poirot live up to our expectations? Yes, he does, and markedly so.... As tricky as anything written by Agatha Christie. The Monogram Murders has a life and freshness of its own. Poirot is still Poirot. Poirot is back.” - Alexander McCall Smith, New York Times bestselling author of The No. 1 Ladies' Detective Agency

“Sophie Hannah is a prodigious talent. I can’t wait to see what she does next.” - Laura Lippman

“Sophie Hannah’s idea for a plot line was so compelling and her passion for my grandmother’s work so strong, that we felt that the time was right for a new Christie to be written.” - Mathew Prichard, grandson of Agatha Christie

“Sharply written and rigorously plotted, this Poirot mystery rivals many of Christie’s own.” - NPR

“Equal parts charming and ingenious, dark and quirky and utterly engaging…I was thrilled to see Poirot in such very, very good hands. Reading The Monogram Murders was like returning to a favorite room of a long-lost home.” - Gillian Flynn, #1 New York Times bestselling author of Gone Girl

“Sophie Hannah’s The Monogram Murders does Christie proud. Our favorite detective is back and in impeccable form!” - Charles Todd, New York Times bestselling author of An Unwilling Accomplice