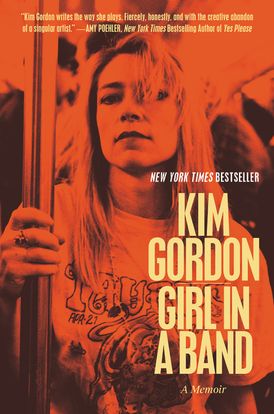 Kim Gordon, founding member of Sonic Youth, fashion icon, and role model for a generation of women, now tells her story—a memoir of life as an artist, of music, marriage, motherhood, independence, and as one of the first women of rock and roll, written with the lyricism and haunting beauty of Patti Smith's Just Kids.

Often described as aloof, Kim Gordon opens up as never before in Girl in a Band. Telling the story of her family, growing up in California in the '60s and '70s, her life in visual art, her move to New York City, the men in her life, her marriage, her relationship with her daughter, her music, and her band, Girl in a Band is a rich and beautifully written memoir.

Gordon takes us back to the lost New York of the 1980s and '90s that gave rise to Sonic Youth, and the Alternative revolution in popular music. The band helped build a vocabulary of music—paving the way for Nirvana, Hole, Smashing Pumpkins and many other acts. But at its core, Girl in a Band examines the route from girl to woman in uncharted territory, music, art career, what partnership means—and what happens when that identity dissolves.

Evocative and edgy, filled with the sights and sounds of a changing world and a transformative life, Girl in a Band is the fascinating chronicle of a remarkable journey and an extraordinary artist.

“Kim Gordon writes the way she plays. Fiercely, honestly, and with the creative abandon of a singular artist.” — AMY POEHLER, actor, producer, writer

“I’ve always admired Kim Gordon. She is cool, smart, and dignified. Girl in a Band is a fascinating and honest memoir full of raw emotion and insight.” — SOFIA COPPOLA, filmmaker

“Written with the same cool passion she brings to her lyrics, Gordon delivers a generous look at life inside the punk whirlwind.” — Kirkus Reviews

Everybody loves Kim Gordon. So it’s pretty much my bet that everybody will be hanging on the words of anyone who’s read her forthcoming memoir (which is reportedly phenomenal). [Ed. note: It’s even better than you’re probably expecting.] — Flavorwire

“From beginning to end, the icon chronicles the evolution of music, art, and herself, set in and out of an ever-changing New York.” — Interview

Gordon’s career as a musician, artist, critic, performer, producer, and designer spanned the last truly hip era of downtown New York. The names and the nostalgia-for those who remember or who wish they did-are well worth the price of admission. — Booklist

Kim Gordon is an artist, musician, producer, fashion designer, writer, and actress. She is a founding member of the experimental post-punk band Sonic Youth. Following the breakup of Sonic Youth, Gordon formed the group Body/Head. A collection of her early critical art writing entitled Is It My Body? was released by Sternberg Press in January 2014. Recent art exhibitions include a show of paintings through the Gagosian Gallery in Los Angeles and the show The City Is a Garden at 303 Gallery in New York. She lives in New York and Los Angeles.

Other Works by Kim Gordon