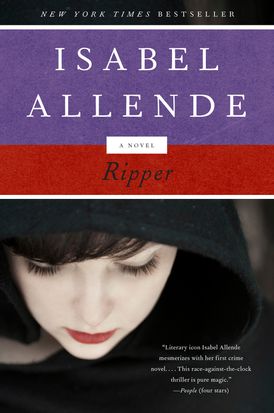 Isabel Allende—the New York Times bestselling author whose books, including Maya’s Notebook, Island Beneath the Sea, and Zorro, have sold more than 57 million copies around the world—demonstrates her remarkable literary versatility with Ripper, an atmospheric, fast-paced mystery involving a brilliant teenage sleuth who must unmask a serial killer in San Francisco.

The Jackson women, Indiana and Amanda, have always had each other. Yet, while their bond is strong, mother and daughter are as different as night and day. Indiana, a beautiful holistic healer, is a free-spirited bohemian. Long divorced from Amanda’s father, she’s reluctant to settle down with either of the men who want her—Alan, the wealthy scion of one of San Francisco’s elite families, and Ryan, an enigmatic, scarred former Navy SEAL.

While her mom looks for the good in people, Amanda is fascinated by the dark side of human nature, like her father, the SFPD’s Deputy Chief of Homicide. Brilliant and introverted, the MIT-bound high school senior is a natural-born sleuth addicted to crime novels and Ripper, the online mystery game she plays with her beloved grandfather and friends around the world.

When a string of strange murders occurs across the city, Amanda plunges into her own investigation, discovering, before the police do, that the deaths may be connected. But the case becomes all too personal when Indiana suddenly vanishes. Could her mother’s disappearance be linked to the serial killer? Now, with her mother’s life on the line, the young detective must solve the most complex mystery she’s ever faced before it’s too late.

“A rip-roaring, entertaining crime novel. . . .  Allende remains a remarkable spinner of stories. Her prose is sparkling and graceful . . . her ability to portray passion and action undimmed. Ripper grabs you, toys with you, amuses you…” - Minneapolis Star Tribune

“It must have been surprising to discover that [Allende’s] particular literary strengths - a talent for dramatization, a delight in world-building and a passion for investigating relationships between family members - lend themselves so well to a genre she’s never bothered with before. I am hoping she’ll continue her killings.” - San Francisco Chronicle

“There are deliciously creepy elements in Ripper, much like those in the dark Scandinavian crime novels one of its characters loves.” - Seattle Times

“Allende doesn’t miss a beat, smoothly exposing the underbelly of the city and the shenanigans of its wealthy elite. You might guess the identity of the killer before the last pages, but you won’t care-the shocks and unexpected twists will keep you riveted until the end.” - More magazine

“Like many of Allende books it’s a joy to read with sentences to savor and read aloud. An excellent novel, RIPPER is HIGHLY RECOMMENDED.” - I Love a Mystery (Blog)

Isabel Allende is the author of twelve works of fiction, including the New York Times bestsellers Maya’s Notebook, Island Beneath the Sea, Inés of My Soul, Daughter of Fortune, and a novel that has become a world-renowned classic, The House of the Spirits. Born in Peru and raised in Chile, she lives in California.

Other Works by Isabel Allende

Island Beneath the Sea

City of the Beasts

Forest of the Pygmies

The Sum of Our Days