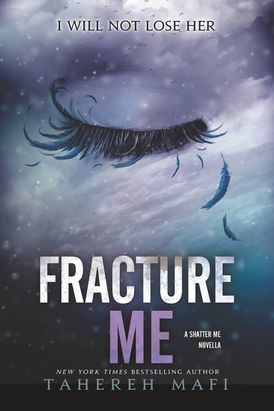 In this electrifying sixty-page companion novella to the New York Times bestselling Shatter Me series, discover the fate of the Omega Point rebels as they go up against The Reestablishment.

Set during and soon after the final moments of Unravel Me, Fracture Me is told from Adam's perspective. As the Omega Point rebels prepare to fight the Sector 45 soldiers, Adam's more focused on the safety of Juliette, Kenji, and his brother. The Reestablishment will do anything to crush the resistance . . . including killing everyone Adam cares about.

Fracture Me sets the stage for Ignite Me, the explosive third installment in Tahereh Mafi's epic dystopian series. It's a novella not to be missed by fans who crave action-packed stories with tantalizing romance like Divergent by Veronica Roth, The Hunger Games by Suzanne Collins, and Legend by Marie Lu.

Don’t miss Defy Me, the shocking fifth book in the Shatter Me series!

Tahereh Mafi is the National Book Award nominated and New York Times and USA Today bestselling author of the Shatter Me series, A Very Large Expanse of Sea, An Emotion of Great Delight, Whichwood, and Furthermore. You can find her online at www.taherehmafi.com