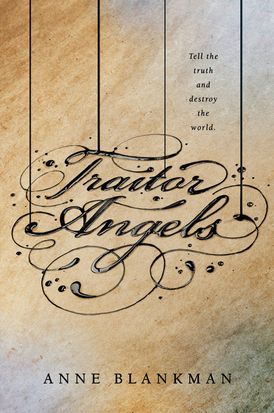 A romantic and exhilarating historical adventure about a girl who must unlock the secrets within Paradise Lost to save her father—perfect for fans of Revolution and Code Name Verity—from acclaimed author Anne Blankman, whose debut novel, Prisoner of Night and Fog, was a Sydney Taylor Notable Book for Teens in 2015

Six years have passed since England’s King Charles II returned from exile to reclaim the throne, ushering in a new era of stability for his subjects.

Except for Elizabeth Milton. The daughter of notorious poet John Milton, Elizabeth has never known her place in this shifting world—except by her father’s side. By day she helps transcribe his latest masterpiece, the epic poem Paradise Lost, and by night she learns languages and sword fighting. Although she does not dare object, she suspects that he’s training her for a mission whose purpose she cannot fathom.

Until one night the king’s men arrive at her family’s country home to arrest her father. Determined to save him, Elizabeth follows his one cryptic clue and journeys to Oxford, accompanied by her father’s mysterious young houseguest, Antonio Viviani, a darkly handsome Italian scientist who surprises her at every turn. Funny, brilliant, and passionate, Antonio seems just as determined to protect her father as she is—but can she trust him with her heart?

When the two discover that Milton has planted an explosive secret in the half-finished Paradise Lost—a secret the king and his aristocratic supporters are desperate to conceal—Elizabeth is faced with a devastating choice: cling to the shelter of her old life, or risk cracking the code, unleashing a secret that could save her father . . . and tear apart the very fabric of society.

“Blankman weaves religion, science, literary genius, poetry, and romance into a mystery that, if solved, could turn the world upside down...Readers will love the journey.” - Kirkus Reviews (starred review)

“The in-depth characters draw readers in as each one’s complexity propels the plot to the next twist and turn.” - Voice of Youth Advocates (VOYA)

Praise for CONSPIRACY OF BLOOD AND SMOKE: “Will leave the reader breathless with each unpredictable plot twist.” - Voice of Youth Advocates (VOYA) (starred review)

Praise for CONSPIRACY OF BLOOD AND SMOKE: “Suspenseful and clever...The tight interweaving of Gretchen’s journey with historical events lends a sense of the genuine-and results in the fascinating experience of following a quest readers know is doomed to fail.” - Kirkus Reviews

Praise for CONSPIRACY OF BLOOD AND SMOKE: “Bold and brave” - Booklist

Praise for PRISONER OF NIGHT AND FOG: “I’m in awed envy of the daring with which Anne Blankman plunges into her difficult and sensitive subject matter. It’s terrifying and incredible to think how much of this story is true.” - Elizabeth Wein, award-winning author of CODE NAME VERITY

Praise for PRISONER OF NIGHT AND FOG: “A nail-biting visit to Adolf Hitler’s inner circle in the early days of the Nazi party’s rise to power.” - Jennifer Armstrong, author of In My Hands: Memories of a Holocaust Rescuer (with Irene Gut Opdyke)

Praise for PRISONER OF NIGHT AND FOG: “An interesting perspective on a well-trod era.” - Kirkus Reviews

Praise for PRISONER OF NIGHT AND FOG: “Haunting and captivating” - School Library Journal

Praise for PRISONER OF NIGHT AND FOG: “A winning gamble” - Booklist

Anne Blankman is the acclaimed author of Prisoner of Night and Fog, which received a starred review and a Flying Start from Publishers Weekly. When Anne was twelve, she read Anne Frank's diary and has been haunted by World War II ever since. The idea for Conspiracy of Blood and Smoke came to her after she read about a real-life unsolved street assassination from January 1933, which was the inspiration for Monika Junge's murder. To research this book, she studied a wide range of sources, including biographies, memoirs, social histories, psychological profiles, old maps, photographs, and video footage.

Anne lives in southeastern Virginia with her husband, Mike, her young daughter, Kirsten, and, of course, lots and lots of books.

Other Works by Anne Blankman

Prisoner of Night and Fog