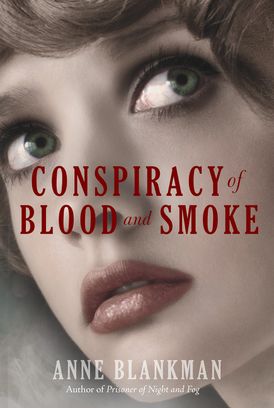 Acclaimed author Anne Blankman returns to the shadowy and dangerous world of 1930s Germany in this thrilling sequel to Prisoner of Night and Fog, perfect for fans of Code Name Verity.

The girl known as Gretchen Whitestone has a secret: She used to be part of Adolf Hitler's inner circle. More than a year after she made an enemy of her old family friend and fled Munich, she lives in England, posing as an ordinary German immigrant, and is preparing to graduate from high school. Her love, Daniel, is a reporter in town. For the first time in her life, Gretchen is content.

But then Daniel gets a telegram that sends him back to Germany, and Gretchen's world turns upside down. When she receives word that Daniel is wanted for murder, she has to face the danger she thought she'd escaped—and return to her homeland.

Gretchen must do everything she can to avoid capture, even though saving Daniel will mean consorting with her former friends, the Nazi elite. And as they work to clear Daniel's name, Gretchen and Daniel discover a deadly conspiracy stretching from the slums of Berlin to the Reichstag itself. Can they dig up the explosive truth and get out in time—or will Hitler discover them first?

“Suspenseful and clever...The tight interweaving of Gretchen’s journey with historical events lends a sense of the genuine-and results in the fascinating experience of following a quest readers know is doomed to fail.” - Kirkus Reviews

Praise for PRISONER OF NIGHT AND FOG: “I’m in awed envy of the daring with which Anne Blankman plunges into her difficult and sensitive subject matter. It’s terrifying and incredible to think how much of this story is true.” - Elizabeth Wein, award-winning author of CODE NAME VERITY

Praise for PRISONER OF NIGHT AND FOG: “PRISONER OF NIGHT AND FOG seamlessly blends the fascinating, terrifying facts of Hitler’s rise to power with a gripping murder mystery. Gretchen is a brave and believable protagonist, and readers will become engrossed in her struggle to uncover the truth. I can’t wait for the sequel.” - Michelle Cooper, award-winning author of the Montmaray Journals series

Praise for PRISONER OF NIGHT AND FOG: “A nail-biting visit to Adolf Hitler’s inner circle in the early days of the Nazi party’s rise to power.” - Jennifer Armstrong, author of In My Hands: Memories of a Holocaust Rescuer (with Irene Gut Opdyke)

Praise for PRISONER OF NIGHT AND FOG: “An interesting perspective on a well-trod era.” - Kirkus Reviews

Anne Blankman is the acclaimed author of Prisoner of Night and Fog, which received a starred review and a Flying Start from Publishers Weekly. When Anne was twelve, she read Anne Frank's diary and has been haunted by World War II ever since. The idea for Conspiracy of Blood and Smoke came to her after she read about a real-life unsolved street assassination from January 1933, which was the inspiration for Monika Junge's murder. To research this book, she studied a wide range of sources, including biographies, memoirs, social histories, psychological profiles, old maps, photographs, and video footage.

Anne lives in southeastern Virginia with her husband, Mike, her young daughter, Kirsten, and, of course, lots and lots of books.

Other Works by Anne Blankman

Prisoner of Night and Fog