The Extraordinary Story of the Iraqi Who Risked Everything to Fight with the U.S. Navy SEALs 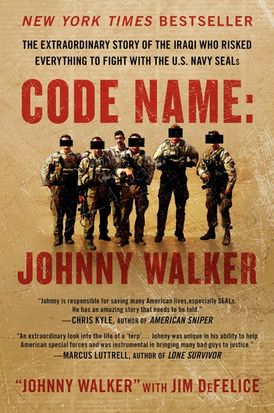 The Extraordinary Story of the Iraqi Who Risked Everything to Fight with the U.S. Navy SEALs

"I cannot express how many lives have been touched by Johnny, and how many of us owe him our lives.” —Chris Kyle,  author of American Sniper

The unforgettable true story of the Iraqi translator became a hero to America’s elite warriors.

Night after night, he guided the U.S. Navy SEALs and other American operators through Iraq's most dangerous regions. A translator operating under the code name "Johnny Walker," he risked his life on more than a thousand missions and became a legend in the U.S. special-ops community. But in the eyes of Iraq's terrorists and insurgents, he and his family were marked for death because he worked with the Americans. Fearing for Johnny's safety, the SEALs took it upon themselves to bring this hero and his family to the United States. With inside details on SEAL operations in Iraq and a deeply personal understanding of the tragic price paid by ordinary Iraqis, Code Name: Johnny Walker is a gripping and unforgettable true story that reveals a side of the war that has never been told before.

Includes a new afterword on the rise of ISIS

“A hero. .... Countless Navy SEALs relied on the Iraqi translator’s wile, and sometimes his way with a weapon, to bring them out alive.” - New York Daily News

“Extraordinary... Definitely a must-read for anyone interested in the perspective of an Iraqi who was willing to sacrifice everything in an effort to improve his country, and who was instrumental in bringing many of the bad guys to justice.” - MARCUS LUTTRELL, former U.S. Navy SEAL, recipient of the Navy Cross, and #1 bestselling author of Lone Survivor

“’Johnny Walker’ defines the word ‘brother’ and how it transcends blood. He is a true American at heart, one I trusted with my life as much as every other SEAL I had the honor of working with.” - MIKAL VEGA, retired U.S. Navy SEAL and founder of Vital Warrior

“Johnny is responsible for saving many American lives, especially SEALs. He has an amazing story that I feel needs to be told, and would touch the hearts of all Americans. I cannot express how many lives have been touched by Johnny, and how many of us owe him our lives.” - CHRIS KYLE, former U.S. Navy SEAL and #1 bestselling author of American Sniper

“Johnny’s ingenuity, indomitable spirit, and utter fearlessness not only protected the lives of many SEALs, but also saved countless innocent Iraqis. He is a true hero to all of us. Seeing Johnny and his family living safely in the United States is something I will cherish forever.” - "CAPT. X," active-duty U.S. Navy SEAL Team commanding officer

“Fiery, insightful memoir from the former Iraqi translator who fought alongside U.S. Special Forces during the recent war in Iraq. ... [An] invaluable insider’s perspective of Iraq. ... Vivid. ... A harrowing personal journey of courageous self-empowerment during wartime.” - Kirkus Reviews

“This gripping memoir by ‘Johnny Walker,’ an Iraqi translator who risked his life for eight years to work alongside U.S. Navy SEALs (a job so dangerous that even now he can’t use his real name) is a story of loyalty and courage under fire--literally.” - Parade (Parade's Picks)

“Riveting and illuminating. ... Reads more like a fictional thriller than a memoir. Walker’s story is amazing and gives a unique perspective on the Iraqi War.” - BlackFive.net

“A remarkable story. ... Offering a unique perspective on the Iraq War, ‘Code Name: Johnny Walker’ tells the story of one Iraqi who risked everything to fight with U.S. troops, in particular the Navy SEALs, becoming perhaps the only ‘terp’ (interpreter) to be welcomed into their tight-knit fold.” - FoxNews.com

“Riviting. ... For those who think they’ve heard the last word on the Iraq war, Code Name: Johnny Walker is an eye-opener. With DeFelice, Walker has written a mesmerizing memoir about his life, including the six years in which he helped American forces.” - Christian Science Monitor

“A breathtaking memoir -- a stirring tale of courage and convictions. It adds a fascinating and insightful new dimension to the history of the Iraq War.” - Coronado Eagle-Journal

“Extremely informative and gripping. ... Offers a unique perspective. ... Johnny became the SEALs’ most trusted interpreter, willing to sacrifice everything in an effort to improve his country and keep his SEAL brothers safe.” - American Thinker

“Johnny Walker went well above and beyond his duties as an interpreter to help save countless American lives. ... Walker became a valuable asset not only because of his language skills but his valor in executing missions. ... Be sure to check out the book.” - The Blaze

“The story of an Iraqi interpreter who spent six dangerous years working with American special forces before being brought to safety in America.” - New York Times Book Review

“This is an excellent memoir, a story about the post-9/11 war in Iraq as told by someone who is simultaneously an insider and an outsider. ... “The voice--earnest, disillusioned, passionate, patriotic--seems undeniably to be that of the pseudonymous ‘Johnny Walker.’” - Booklist

After the 2003 invasion of his home country, Iraqi-born "Johnny Walker" applied to become a translator for the U.S. Army. Turned down, out of work, and desperate to feed his family, Johnny was on the verge of despair until one night he interceded in a dispute between some Iraqi women and Ameri-can MPs. Impressed, the MPs arranged to hire him as their interpreter, or "terp." Johnny displayed such talent and incredible courage under fire that several months later an elite unit of Navy SEALs took him under its wing. He quickly became the most sought-after terp in the country, receiving numerous citations and commendations for his work. Credited by SEAL sniper Chris Kyle with saving countless American lives, Johnny spent six years working with SEALs and other special operations forces throughout Iraq, completing more than one thousand missions. After narrowly escaping two attempts on his life, Johnny was helped to the United States by the SEALs in 2009. He and his family currently live in California, where he helps train special operations units.