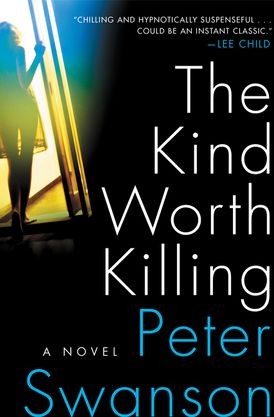 A devious tale of psychological suspense so irresistible that it prompts Entertainment Weekly to ask, “Is The Kind Worth Killing the next Gone Girl?” From one of the hottest new thriller writers, Peter Swanson, a name you may not know yet (but soon will), this is his breakout novel in the bestselling tradition of Paula Hawkins’ The Girl on the Train—and is soon to be a major movie directed by Agnieszka Holland.

In a tantalizing set-up reminiscent of Patricia Highsmith’s classic Strangers on a Train… On a night flight from London to Boston, Ted Severson meets the stunning and mysterious Lily Kintner. Sharing one too many martinis, the strangers begin to play a game of truth, revealing very intimate details about themselves. Ted talks about his marriage that’s going stale and his wife Miranda, who he’s sure is cheating on him. Ted and his wife were a mismatch from the start—he the rich businessman, she the artistic free spirit—a contrast that once inflamed their passion, but has now become a cliché.

But their game turns a little darker when Ted jokes that he could kill Miranda for what she’s done. Lily, without missing a beat, says calmly, “I’d like to help.” After all, some people are the kind worth killing, like a lying, stinking, cheating spouse. . . .

Back in Boston, Ted and Lily’s twisted bond grows stronger as they begin to plot Miranda's demise. But there are a few things about Lily’s past that she hasn’t shared with Ted, namely her experience in the art and craft of murder, a journey that began in her very precocious youth.

Suddenly these co-conspirators are embroiled in a chilling game of cat-and-mouse, one they both cannot survive . . . with a shrewd and very determined detective on their tail.

“Chilling and hypnotically suspenseful … could be an instant classic.” - Lee Child, author of Personal

“A fun read, full of switchbacks and double crosses… With classic misdirection, Swanson distracts us from the details - changing up murderers and victims fast enough to keep us reading. And, implausibly, rooting for the cold-blooded killer at this thriller’s core.” - Boston Globe

“A twisty tale of warring sociopaths [and] a good companion to similar stories by Laura Lippman and Gillian Flynn.” - Booklist

“Revenge has rarely been served colder than in Swanson’s exceptional thriller....With scalpel-sharp prose, Swanson probes the nature of coldblooded evil. Few will be prepared for the crushing climax.” - Publishers Weekly (starred review)

“A devilishly twisty plot, with some gasp-inducing moments. And the ending is terrific.” - Bookseller (UK)

“[Lily] becomes my favourite sociopath—and believe me, there are plenty of them in this very convincing, tightly-plotted novel of revenge and betrayal. . . . Very entertaining.” - Daily Mail (UK)

“A work of lovely violence and graceful malevolence, The Kind Worth Killing slips into your life like a stiletto in the ribs. This is a book that launches Peter Swanson straight into the ranks of the killer elite, alongside Tana French and Gillian Flynn. He’s the real deal.” - Joe Hill, author of NOS4A2

“Peter Swanson has updated Patricia Highsmith’s Strangers on a Train for the new millennium...This is a well written and highly accomplished thriller… You cannot fail to be captivated by this book.” - Tatler (UK)

“Gripping, elegantly and stylishly written, and extremely hard to put down!” - Sophie Hannah, author of The Monogram Murders and Kind of Cruel

“Filled with double-timers and double-crossers, cold-eyed stalkers and cold-blooded murderers, The Kind Worth Killing paints a riveting, disturbing picture of marriage gone horribly awry, with no shortage of startling surprises. If you’re engaged to get married, by all means read something else.” - Chris Pavone, author of The Expats

“A terrifically hypnotic page-turner that marks Peter Swanson as an exciting new talent.” - Good Housekeeping, Thriller of the Month (UK)

“From its initial nod to Strangers on a Train onwards, this is a homage to Patricia Highsmith, but in some ways it outdoes the queen of queasy in sheer nastiness. . . . [Swanson] continually juggles narrators and pulls off surprises.” - Sunday Times (UK)

“Nothing and no one are as they first appear in this deliciously twisted and devious thriller… A classy, slick and stiletto-sharp thriller that builds to a nerve-shredding climax.” - Sunday Mirror (UK)

“[There are] many surprises in a plot that twists and turns like a jack-knife.” - BBC Radio 4 (UK)

“A dark tale of an affair that ends in murder, with a number of Gone Girl-esque twists along the way.” - Shortlist (UK)

“An extraordinarily well-written tale of deceit and revenge told by a very gifted writer. . . . The characters [] seem normal on the outside, but are deliciously abnormal on the inside. The twists are not just in the plot; they are also in the heads of the plotters.” - Nelson DeMille

“Revenge has rarely been served colder than in Swanson’s exceptional thriller, his second standalone after 2013’s The Girl with a Clock for a Heart. . . . With scalpel-sharp prose, Swanson probes the nature of coldblooded evil. Few will be prepared for the crushing climax.” - Publishers Weekly (starred review)

“Might be first truly unputdownable book of 2015. . . . A whole plethora of gasping surprises and gutting reveals that’ll will keep you on the edge of the seat all to the end. . . . An addictive and seductive read. . . .Simply brilliant stuff.” - Upcoming4me.com

“The next Gone Girl? . . . There aren’t just two unreliable narrators, there are four. There isn’t just one enormous, game-changing twist. Try three. . . . You’ll also lose count of all the sociopaths . . . they’re each deranged but oh-so-compelling.” - Entertainment Weekly

“Grabbed me right from the beginning, and kept me hooked until the end. . . . The author did a great job pulling off a difficult challenge and writing style. The uniqueness of this, and the skill with which it was executed, made for a really great book.” - Mysteryplayground.net

“This devilishly clever noir thriller [has] head-spinning surprises that make it an intoxicating read. . . . The book will inevitably earn comparisons to Gone Girl. . . . This one makes good on the promise, right down to the chilling final paragraph.” - Fort Worth Star-Telegram

“Suspenseful twists and turns, expert pacing and a breathless race to a surprise ending. . . . [A] captivating, powerful thriller about sex, deception, secrets, revenge, the strange things we get ourselves wrapped up in, and the magnetic pull of the past.” - Shelf Awareness

“THE KIND WORTH KILLING . . . meets and exceeds the high-water mark that its predecessor established. . . . The floor underneath the novel doesn’t just shift, it turns upside down. . . . This top-notch thriller has enough twists and surprises for three books.” - Bookreporter.com

“His central premise may be borrowed from Strangers on a Train, but Swanson takes the notion in some truly startling directions, excelling in the vividly etched characterisation of his protagonists. . . . But what makes The Kind Worth Killing so enjoyable is the beautifully constructed plotting.” - Financial Times (UK)

“The Kind Worth Killing has made me fall in love with plot twists again. . . . A brilliantly written thriller with a heart of darkness, executed with great skill and style. Seriously impressive writing.” - Big Issue (UK)

“An intricate tale of murder planned and plans gone hopelessly awry. . . . There are Hitchockian overtones, as well as the sort of last-page narrative tweak that would undoubtedly bring a Mona Lisa smile to Sir Alfred’s usually taciturn countenance.” - BookPage

“The Year’s Best Fiction: Publishers now love to dub any sociopathic take on a broken marriage ‘the next Gone Girl.’ Swanson’s vicious little novel actually earns that comparison, but it has just as much in common with Patricia Highsmith [and] Raymond Chandler… So ruthlessly clever it’s criminal.” - Entertainment Weekly