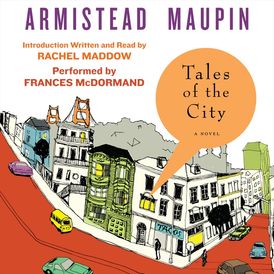 The first novel in the beloved Tales of the City series, Armistead Maupin’s best-selling San Francisco saga, soon to return to television as a Netflix original series once again starring Laura Linney and Olympia Dukakis.

“Amistead Maupin’s groundbreaking books about bohemian life in San Francisco are now available as unabridged audios. Actress Frances McDormand does a splendid job as she narrates the first, Tales of the City. …McDormand’s strong voice adapts to each character, young and old, male and female, straight and gay.” - USA Today

The Happy Glampers: The Complete Novel

The Little Bakery on Rosemary Lane

The Trouble with Goats and Sheep