Seven Wonders Journals: The Select and The Orphan 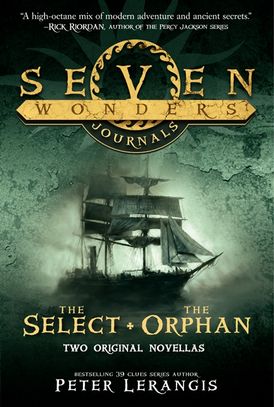 Seven Wonders Journals: The Select and The Orphan

The Seven Wonders adventures continue in this print bind-up of The Select and The Orphan. The Select tells the story of thirteen-year-old Burt Wenders, the first documented carrier of the G7W gene, and his fated voyage to the island that would eventually come to house the Karai Institute. In The Orphan, learn the story of Daria, orphaned at a young age and enslaved by the Babylonians, and her valiant battle to escape the only city she's ever called home. These titles are together in print for the first time ever.

With key historical details and plenty of backstory surprises, this is a perfect addition to the library of new and continuing fans of the New York Times bestselling Seven Wonders series by Peter Lerangis, author of three stories in the 39 Clues series.

PETER LERANGIS is the author of more than 160 books, which have sold more than four million copies and been translated into 27 different languages, including two books in the New York Times–bestselling series The 39 Clues (Book 3: The Sword Thief and 7: The Viper’s Nest). He is also author of the hilarious, edgy YA novel wtf, and the Drama Club series, about a group of high school theater kids in a town where theater is big-budget and life-changing. His novel Smiler’s Bones, based on the true story of a Polar Eskimo boy orphaned in New York City at the turn of the 20th century, was selected as a N.Y. Public Library Best Books for Teens 2006, a Bank Street Best Books of 2006, and a Junior Library Guild pick. Along with Rick Riordan, Gordon Korman, and Jude Watson, he has co-authored the upcoming Vespers Rising. His novel Somebody, Please Tell Me Who I Am, a collaboration with Harry Mazer, will be published in 2012, along with a three-book series, Perfect. Peter was one of three authors, along with R. L. Stine and Marc Brown, invited by the White House to represent the U. S. in the first Russian Book Festival in 2003. He is a Harvard graduate with a degree in biochemistry. After college he became a Broadway musical theater actor. He has run a marathon and gone rock-climbing during an earthquake, but not on the same day. He lives in New York City with his wife, musician Tina deVaron, and their two sons, Nick and Joe. In his spare time, he likes to eat chocolate. Lots of it. Seriously, he loves chocolate.