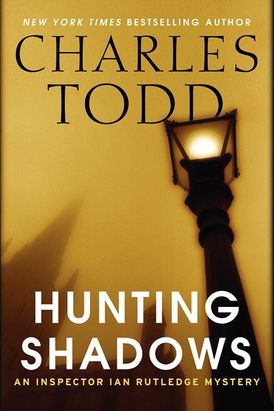 A dangerous case with ties leading back to the battlefields of World War I dredges up dark memories for Scotland Yard Inspector Ian Rutledge in Hunting Shadows, a gripping and atmospheric historical mystery set in 1920s England, from acclaimed New York Times bestselling author Charles Todd.

A society wedding at Ely Cathedral in Cambridgeshire becomes a crime scene when a man is murdered. After another body is found, the baffled local constabulary turns to Scotland Yard. Though the second crime had a witness, her description of the killer is so strange its unbelievable.

Despite his experience, Inspector Ian Rutledge has few answers of his own. The victims are so different that there is no rhyme or reason to their deaths. Nothing logically seems to connect them—except the killer. As the investigation widens, a clear suspect emerges. But for Rutledge, the facts still don’t add up, leaving him to question his own judgment.

In going over the details of the case, Rutledge is reminded of a dark episode he witnessed in the war. While the memory could lead him to the truth, it also raises a prickly dilemma. To stop a murderer, will the ethical detective choose to follow the letter—or the spirit—of the law?

“Another winner…Strong atmosphere and a complicated mystery make this book one that readers won’t be able to put down.” - Romantic Times 4 1/2 stars on HUNTING SHADOWS

“As always, the North Carolina-based mother and son who write under the pseudonym Charles Todd do a beautiful job with the period detail, making these books a nostalgic outing to England between the world wars.” - Raleigh News & Observer

“Readers who stick with the chase, though, should be enthralled, as Rutledge sorts through a fascinating portrait gallery of witnesses and suspects, most of whom aren’t telling him the whole truth.” - Wilmington News Journal

“Of all the places where Inspector Ian Rutledge’s Scotland Yard assignments have taken him, the desolate Fen country must surely be the eeriest. [This is an] excellent historical series.” - New York Times Book Review on HUNTING SHADOWS

Charles Todd is the New York Times bestselling author of the Inspector Ian Rutledge mysteries, the Bess Crawford mysteries, and two stand-alone novels. Among the honors accorded to the Ian Rutledge mysteries are the Barry Award and nominations for the Independent Mystery Booksellers Association’s Dilys Award, the Edgar and Anthony Awards in the U.S., and the John Creasey Award in the UK. A mother-and-son writing team, they live on the East Coast.