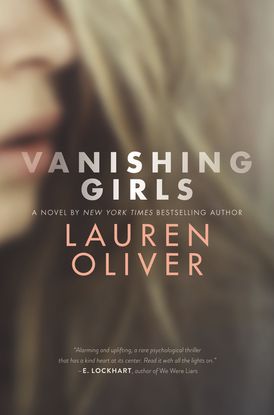 Dara and Nick used to be inseparable, but that was before the accident that left Dara's beautiful face scarred and the two sisters totally estranged.

When Dara vanishes on her birthday, Nick thinks Dara is just playing around. But another girl, nine-year-old Madeline Snow, has vanished, too, and Nick becomes increasingly convinced that the two disappearances are linked.

Now, Nick has to find her sister, before it's too late.

In this edgy and compelling novel, Lauren Oliver creates a world of intrigue, loss, and suspicion as two sisters search to find themselves, and each other.

“Alarming and uplifting, a rare psychological thriller that has a kind heart at its center. Read it with all the lights on.” — --E. Lockhart, author of We Were Liars

“Perfect for readers who devoured We Were Liars, it’s the sort of novel that readers will race to finish, then return to the beginning to marvel at how it was constructed—and at everything they missed.” — Publishers Weekly (starred review)

“Oliver’s characterizations and background stories are well-developed and compulsively readable. Recommend to teens looking for a well-written work with a juicy ending. They will not be disappointed.” — School Library Journal

“Best-selling Oliver weaves a taut mystery interspersed with blog posts about Madeline’s disappearance, and the story is made all the more compelling by Nick and Dara’s close but troubling relationship, marked by both love and intense jealousy.” — Booklist

PRAISE FOR BEFORE I FALL: “Oliver’s debut novel is raw, emotional, and, at times, beautiful....readers will love Samantha best as she hurtles toward an end as brave as it is heartbreaking.” — Publishers Weekly (starred review)

PRAISE FOR BEFORE I FALL: “Samantha’s attempts to save her life and right the wrongs she has caused are precisely what will draw readers into this complex story and keep them turning pages until Sam succeeds in living her last day the right way.” — Voice of Youth Advocates (VOYA) (starred review)

PRAISE FOR BEFORE I FALL: “Oliver, in a pitch-perfect teen voice, explores the power we have to affect the people around us in this intensely believable first novel...This is a compelling book with a powerful message and should not be missed.” — ALA Booklist

PRAISE FOR PANIC: “Oliver makes a white-knuckle return to realism that will have readers up until the wee hours.” — Kirkus Reviews (starred review)

PRAISE FOR PANIC: “Oliver’s novel is a wholly believable and compulsively readable tale of friendship, loyalty, survival, and courage.” — Booklist

PRAISE FOR PANIC: “Retains all the tension and excitement of Oliver’s Delirium…A work with sharp corners, dark places, and considerable humanity.” — The Horn Book