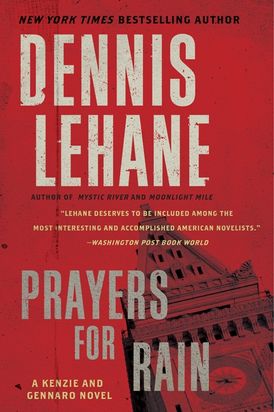 When a former client jumps naked from a Boston landmark, Private Investigator Patrick Kenzie wants to know why. Once a perky young woman in love with life, her suicide is the final fall in a spiral of self-destruction.

What Kenzie discovers is a sadistic stalker who targeted the woman and methodically drove her to her death – a monster that the law can’t touch. But Kenzie can. He and his former partner, Angela Gennaro, will fight a mind-twisting battle against the psychopath, even as he turns tricks on them…

Prayers for Rain is another superior thriller from Dennis Lehane, the bestselling and acclaimed author of Mystic River, Shutter Island, and Gone, Baby, Gone.

“In the miserably hot summer of 1999...the superb detective novels of Dennis Lehane—became a kind of lifeline for me.” - Stephen King, New York Times Book Review

“As in all the best hard-boiled series, each entry reveals more about the principal characters and their relationships in a violent, uncaring world where the only verities are the ones you establish for yourself and defend vigorously. Lehane has worked his way into the top echelon of crime writers.”  - Booklist

“[Lehane]...writes like an angel on crystal meth.”  - Kirkus Reviews