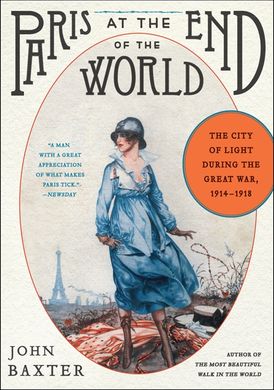 A preeminent writer on Paris, John Baxter brilliantly brings to life one of the most dramatic and fascinating periods in the city’s history.

From 1914 through 1918 the terrifying sounds of World War I could be heard from inside the French capital. For four years, Paris lived under constant threat of destruction. And yet in its darkest hour, the City of Light blazed more brightly than ever. It’s taxis shuttled troops to the front; its great railway stations received reinforcements from across the world; the grandest museums and cathedrals housed the wounded, and the Eiffel Tower hummed at all hours relaying messages to and from the front.

At night, Parisians lived with urgency and without inhibition. Artists like Pablo Picasso achieved new creative heights. And the war brought a wave of foreigners to the city for the first time, including Ernest Hemingway and Baxter’s own grandfather, Archie, whose diaries he used to reconstruct a soldier’s-eye view of the war years. A revelatory achievement, Paris at the End of the World shows how this extraordinary period was essential in forging the spirit of the city beloved today.

“Well-researched and entertaining. ... The content is compelling and the writing vivid. … Baxter’s anecdotes and observations are consistently enlightening.” - Washington Post

“Lively and characterful. ... Shows the panache the French brought to their ‘improvised’ war.” - Liesl Schillinger in the New York Times (9 Books That Would Make Great Gifts)

“An intimate memoir of his grandfather’s experiences of that war. ... All this is done with Baxter’s inimitable lightness of touch and conversational style, which often belies the profound knowledge he has of his adoptive city.” - Anton Gill, author of A Dance Between the Flames: Berlin Between the Wars and An Honourable Defeat: A History of German Resistance to Hitler, 1933-1945

“An enjoyable, swift read . . . as fun as a work of historical fiction.” - Kirkus Reviews

“Captivating…. In the series of vignettes and anecdotes that make up this elegant and sophisticated book, Baxter reveals an encyclopaedic knowledge of the City of Light.” - Sydney Morning Herald

“Engaging. ... An entertaining story of wartime Paris, and of Baxter’s search to find his heritage within it.” - The Australian

“The most original and unexpectedly beguiling account of the Great War I have ever read. John Baxter is one of the master storytellers of our age ... A revelation, an adventure, a joy to read.” - Kevin Jackson, author of Constellation of Genius:1922: Modernism Year One.