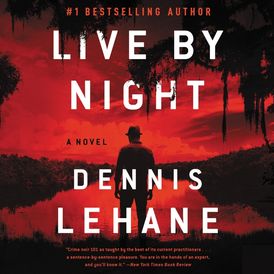 From New York Times bestselling author Dennis Lehane comes this epic, unflinching tale of the making and unmaking of a gangster in the Prohibition Era of the Roaring Twenties—now a Warner Bros. movie starring Ben Affleck, Elle Fanning, Zoe Saldana, and Sienna Miller.

Meticulously researched and artfully told, Live by Night is the riveting story of one man’s rise from Boston petty thief to the Gulf Coast’s most successful rum runner, and it proves again that the accolades New York Times bestseller Lehane consistently receives are well deserved. He is indeed, “a master” (Philadelphia Inquirer) whose “true literary forefathers include John Steinbeck as well as Raymond Chandler” (Baltimore Sun). And, “Boy, does he know how to write” (Elmore Leonard).

“[Dennis Lehane] deserves to be included among the most interesting and accomplished American novelists of any genre or category.”
—Washington Post Book World

Dennis Lehane is the author of thirteen novels—including the New York Times bestsellers Live by Night; Moonlight Mile; Gone, Baby, Gone; Mystic River; Shutter Island; and The Given Day—as well as Coronado, a collection of short stories and a play. He lives in California with his family.