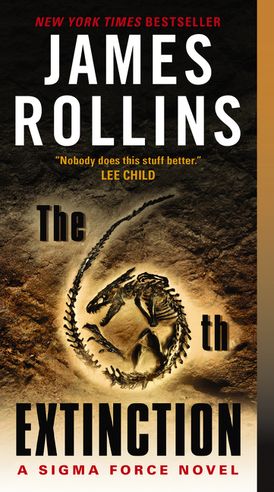 In a masterful epic that combines timeless mystery and ripped-from-the-headlines scientific intrigue, New York Times bestselling author James Rollins takes humankind to its endpoint, to a fate inscribed in rock and ice in an event known as

A military research station buried in the remote Sierra Nevada Mountains of Northern California broadcasts a frantic distress call that ends with a chilling order:

"This is sierra, victor, whiskey. There's been a breach. Failsafe initiated. No matter the outcome: Kill us . . . kill us all."

The site is part of TECOMM, the U.S. Army Test Command. When help arrives to investigate, they discover that everyone in the lab is dead--not just the scientists, but every living thing for fifty square miles is annihilated: every animal, plant, and insect, even bacteria. The land is completely sterile-- and the blight is spreading.

Only one team on earth has the scientific knowledge and military precision to handle this mission: Commander Gray Pierce and Sigma. The dead scientists were working on a secret project, researching radically different forms of life on Earth, life that could change our understanding of biology and humanity itself. But something set off an explosion in the lab, and now Sigma must contend with the apocalyptic aftermath.

To prevent the inevitable, they must decipher a futuristic threat that rises out of the distant past--a time when Antarctica was green and life on Earth was balanced on a knife's edge. Following a fascinating trail of clues buried in an ancient map rescued from the lost Library of Alexandria, Sigma will make a shocking discovery involving a prehistoric continent and a new form of life and death buried under miles of ice. Gray Pierce and his dedicated team must race through eons of time and across distant continents to decipher millennia-old secrets out of the frozen past and untangle mysteries buried deep in the darkest jungles of today, as they face their greatest challenge yet: stopping the Sixth Extinction--the end of humankind.

But is it already too late?

The Sixth Extinction combines pulsating adventure, intriguing history, and cutting-edge advances in science and technology in a thrilling white-knuckle ride that delivers as only James Rollins can.

” . . . this is your summer beach read writ large.” - New York Journal of Books on THE EYE OF GOD

“Rollins has done it again. Real history and science play a key role in all of the action, which never wanes. Amid all of the chaos are some terrific characters who get a chance to shine. Definitely keep an eye out for this one.” - Library Journal (starred review) on THE EYE OF GOD

“The book has everything the genre demands: Nazis, ancient maps, alien life forms, a ticking nuclear clock, and exotic, deadly beasts. Rollins makes it all believable, and ties everything together in a satisfying climax that hints at more adventures to come.” - Publishers Weekly on THE 6TH EXTINCTION

“This is another fast-paced mixture of real science, real history, and wild speculation. For speed freaks (narrative speed, that is), Rollins always delivers the goods. Readers, start your engines.” - Booklist on THE 6TH EXTINCTION

“Adventure, history, science, and technology-sheer perfection from an author who is used to giving exactly that every time he tells a tale!” - Suspense Magazine on THE 6TH EXTINCTION

“Best-selling author Rollins has again crafted an excellent nail-biting thriller that all action adventure readers will love. Rollins always provides author notes with the science and historical facts behind his stories, and the creatures the team encounter are frighteningly possible!” - Library Journal (starred review) on THE 6TH EXTINCTION

“...[I]mmediately brought to mind the works of Michael Crichton at his best. With the constant action supported by more than a helping of science, Rollins constructs a rare story of the fantastic that feels real.” - Examiner.com on THE 6TH EXTINCTION

“[This] is everything-but-the-kitchen-sink storytelling at its most unpredictable.” - Fort Worth Star-Telegram on THE 6TH EXTINCTION

“Another winner. Rollins takes truth and stretches it to create an intense and believable plot, combining pulsating adventure, intriguing history, and cutting-edge advances in science and technology.” - Crimespree Magazine on THE 6TH EXTINCTION

“The 6th Extinction is a thrilling novel that not only entertains, but makes the reader think a great deal.” - Huffington Post on THE 6TH EXTINCTION

“Rollins’ smart writing gives us the adventure, the humor, the humanity, and the adventure- nothing is wasted, and nothing is sacrificed.” - Mustard Seed Thoughts on THE 6TH EXTINCTION

“If you’re a fan of science-themed or techno-thrillers but you don’t know author James Rollins and the Sigma Force series, it’s past time to join the party.” - Sciencethrillers.com on THE 6TH EXTINCTION

“The action is of course nonstop and over the top, as readers have come to expect and enjoy from Rollins, while the science is startling and fascinating.” - Book Banter on THE 6TH EXTINCTION

“This is an exciting -- and scary -- legitimate page turner.” - Examiner.com on THE 6TH EXTINCTION

“The epitome of suspense. The 6th Extinction is relentlessly exciting and thought provoking.” - Portland Book Review on THE 6TH EXTINCTION