A Memoir of Hope 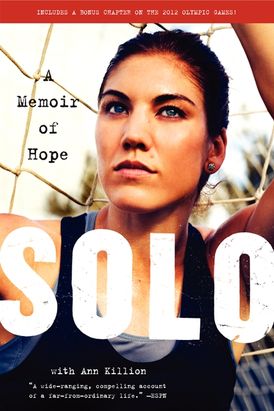 A Memoir of Hope

The Glass Castle meets A League of Their Own in Solo, a candid and moving memoir about family, loss, and reconciliation from Hope Solo, the supremely talented, headline-making goalkeeper for the U.S. women’s national soccer team.

During the 2011 Women’s World Cup, Solo became an idol, role model, and sex symbol to a new generation of young American sports enthusiasts, inspiring the kind of intense devotion not seen since the days of Mia Hamm.

An Olympic gold medalist and arguably America’s sexiest athlete, Hope has been featured on the cover of Sports Illustrated (twice), in ESPN: The Magazine, and as a contestant on the hit ABC television show Dancing with the Stars, and her poignant, compelling, and profoundly inspiring personal history will score big with her legion of fans.

Hope Solo, one of the most charismatic athletes in America, is widely regarded as the best women's goalkeeper in the world. A two-time Olympic gold medalist, she has been a member of the U.S. national team since 2000 and has appeared on the covers of Sports Illustrated and ESPN The Magazine. A prominent spokeswoman for Gatorade and Nike, she starred on the hit reality show Dancing with the Stars. She lives in Seattle, Washington.

Ann Killion is a columnist with the San Francisco Chronicle. She has covered the past ten Olympics and the last three Women's World Cups for SportsIllustrated.com and the San Jose Mercury News.

Other Works by Hope Solo