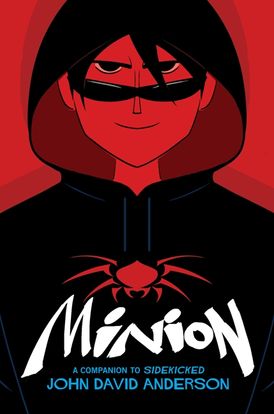 John David Anderson returns to the world of superheroes he created in Sidekicked with an entirely new cast of characters in Minion, a funny and emotional companion to his first breakout tween novel—perfect for superhero fans who also love the work of bestselling authors Rick Riordan, Louis Sachar, and Frank Cottrell Boyce.

Michael Morn might be a villain, but he's really not a bad guy. When you live in New Liberty, there are no Supers and only two kinds of people: those who turn to crime and those who suffer. Michael and his adoptive father spend their days building boxes—special devices with mysterious abilities—that they sell to the mob at a price. They provide for each other, they look out for each other, and they'd never betray each other.

But then a Super comes to town, and Michael's world is thrown into disarray. The Comet could destroy everything Michael and his dad have built, the safe and secure life they've made for themselves. And now Michael and his father face a choice: to hold tight to their life or to let it unravel.

“One of the pleasures of superhero stories is guessing what’s coming next, but the joy here is that most of the time readers will guess wrong. Michael is as complex as the best Marvel and DC characters, and his dialogue is just as funny.” - Kirkus Reviews