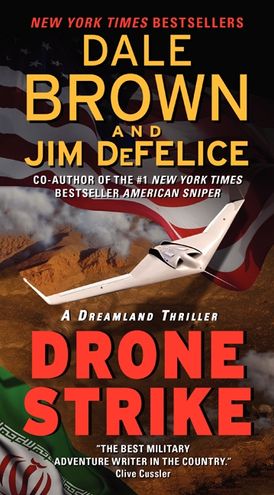 On the President's orders . . . one man is tasked with averting nuclear war

When the U.S. develops intelligence showing that Iran is in the final stages of assembling a nuclear bomb, the President orders Breanna Stockard and the Whiplash team to destroy it before the renegade nation can destabilize the shaky Middle East. Left with no other choice, Stockard sends young Air Force ace Turk Mako behind enemy lines. His orders: pilot a squadron of high-tech nano-UAVs from inside Iran to destroy the weapon and its assembly bunker. Turk and his accompanying Delta Force team succeed, only to discover another site and another device. With the fate of the region hanging in the balance, Turk and Delta Force must fight off Revolutionary Guards, Iranian MiGs, and the elite Quds Force to locate and destroy the second weapon. With time running out, Turk takes matters into his own hands, hoping to accomplish what no machine ever could . . . stop a nuclear war before it begins.

“Brown and DeFelice are at the top of their game… The pages fly by as fast as the quicksilver drones while Turk faces one exciting, life-threatening complication after another.” - Publishers Weekly (starred review)