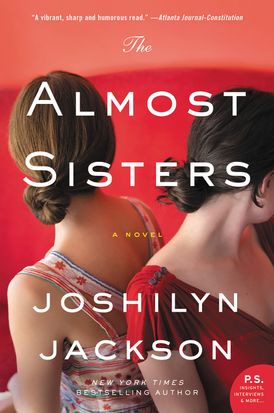 With empathy, grace, humor, and piercing insight, the author of gods in Alabama pens a powerful, emotionally resonant novel of the South that confronts the truth about privilege, family, and the distinctions between perception and reality--the stories we tell ourselves about our origins and who we really are.

Superheroes have always been Leia Birch Briggs’ weakness. One tequila-soaked night at a comics convention, the usually level-headed graphic novelist is swept off her barstool by a handsome and anonymous Batman.

It turns out the caped crusader has left her with more than just a nice, fuzzy memory. She’s having a baby boy—an unexpected but not unhappy development in the thirty-eight year-old’s life. But before Leia can break the news of her impending single-motherhood (including the fact that her baby is biracial) to her conventional, Southern family, her step-sister Rachel’s marriage implodes. Worse, she learns her beloved ninety-year-old grandmother, Birchie, is losing her mind, and she’s been hiding her dementia with the help of Wattie, her best friend since girlhood.

Leia returns to Alabama to put her grandmother’s affairs in order, clean out the big Victorian that has been in the Birch family for generations, and tell her family that she’s pregnant. Yet just when Leia thinks she’s got it all under control, she learns that illness is not the only thing Birchie’s been hiding. Tucked in the attic is a dangerous secret with roots that reach all the way back to the Civil War. Its exposure threatens the family’s freedom and future, and it will change everything about how Leia sees herself and her sister, her son and his missing father, and the world she thinks she knows.

“The Almost Sisters is a book only Joshilyn Jackson could have written… I was swept up by her inimitable voice from the very first page: she deftly combines such unexpected subjects as superheroes, single motherhood, race, and the impact of long-buried secrets.” — Karen Abbott, New York Times bestselling author of Liar, Temptress, Solider, Spy

“In a story of incredible love and bravery, [Jackson] lasers through the weathered grace and mossy tradition of the contemporary south to explode its comic book dualism with blistering genius…Imagine Flannery O’Connor in a Wonder Woman suit, and you’ll get close to the big heart of this brilliant book.” — Lydia Netzer, author of Shine Shine Shine and How to Tell Toledo from the Night Sky

“Beautifully written, fascinating and deep, The Opposite of Everyone is another must-read novel by Jackson... Jackson has done a phenomenal job of weaving the past with the present and unfolding the story layer after layer. This is a masterfully written tale that readers cannot put down.” — RT Book Reviews (top pick), THE OPPOSITE OF EVERYONE

“Jackson delivers another quirky, Southern-based, character-driven novel that combines exquisite writing, vivid personalities, and imaginative storylines while subtly contemplating race, romance, family, and self. A searing yet ultimately uplifting look at broken people who heal themselves and each other through forgiveness, love, and the power of stories.” — Kirkus Reviews (starred review), THE OPPOSITE OF EVERYONE

“The unconventional characters in Jackson’s books often provide thought-provoking studies of love and loyalty; this must-read also contemplates the transformative power of storytelling.” — New York Times Book Review, THE OPPOSITE OF EVERYONE

“Witty, cleverly constructed and including a truly surprising twist, Someone Else’s Love Story turns out to be a nuanced exploration of faith, family and the things we do for love.” — People (3 ½ stars), SOMEONE ELSE'S LOVE STORY

“Jackson has written another spirited page-turner… A satisfying, entertaining read from an admired writer who deserves to be a household name. ” — Kirkus Reviews (starred review) on The Almost Sisters

“Only Joshilyn Jackson can present such serious issues with so much humor and humanity, making us consider just how far we might go to protect the ones we love.” — Brunonia Barry, NY Times bestselling author of The Lace Reader & The Fifth Petal

“A vibrant, sharp and humorous read, brimming with relatable subplots, high-energy scenes and overt superhero references... The author deftly succeeds in writing a book within a book, each one beautifully complementing the other.” — Atlanta Journal-Constitution

“Jackson offers more here than a great plot with relatable, memorable characters and crazy storylines. This cleverly crafted, original tale centers on racism and the dichotomy of the South, as well as complicated familial relationships and elderly care. In other words, she writes fictional tales about real life.” — Fredericksburg.com