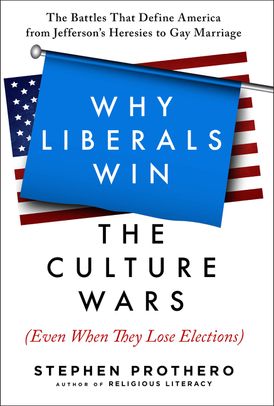 In this timely, carefully reasoned social history of the United States, the New York Times bestselling author of Religious Literacy and God Is Not One places today’s heated culture wars within the context of a centuries-long struggle of right versus left and religious versus secular to reveal how, ultimately, liberals always win.

Though they may seem to be dividing the country irreparably, today’s heated cultural and political battles between right and left, Progressives and Tea Party, religious and secular are far from unprecedented. In this engaging and important work, Stephen Prothero reframes the current debate, viewing it as the latest in a number of flashpoints that have shaped our national identity. Prothero takes us on a lively tour through time, bringing into focus the election of 1800, which pitted Calvinists and Federalists against Jeffersonians and “infidels;” the Protestants’ campaign against Catholics in the mid-nineteenth century; the anti-Mormon crusade of the Victorian era; the fundamentalist-modernist debates of the 1920s; the culture wars of the 1980s and 1990s; and the current crusade against Islam.

As Prothero makes clear, our culture wars have always been religious wars, progressing through the same stages of conservative reaction to liberal victory that eventually benefit all Americans. Drawing on his impressive depth of knowledge and detailed research, he explains how competing religious beliefs have continually molded our political, economic, and sociological discourse and reveals how the conflicts which separate us today, like those that came before, are actually the byproduct of our struggle to come to terms with inclusiveness and ideals of “Americanness.” To explore these battles, he reminds us, is to look into the soul of America—and perhaps find essential answers to the questions that beset us.

“Prothero brilliantly shows how the same groups drive conflicts year after year and often lose-and how the results eventually make us stronger. Useful, instructive reading for all voters in the upcoming election.” - Kirkus (starred review)

“A lively, highly readable, and thought-provoking analysis of how culture wars arise, how they are fought, and how they end. Both sides can learn much from this volume.” - Douglas Laycock, University of Virginia Law School

“Shows how culture-wars battles have been waged since the nation’s founding and have molded the national character and traditions . . . illuminating and absorbing.” - Publishers Weekly (starred review)

“A timely social history that illustrates that the current conflicts are actually part of a much larger story. This book provides social, political, and historical context to the current culture wars and offers constructive and hopeful ideas for defueling the cycle, ideas that are pertinent to liberals and conservatives alike.” - Library Journal

“This important book is less a partisan victory cry than a potent injection of perspective. Prothero tackles the topic of politics with imagination and verve. And he has a revelation: [why] Conservatives are the ones who generally initiate culture wars and [why] they invariably lose.” - The Boston Globe

“Americans typically think of the culture wars as a generally 50-50 battle of the past fifty years. Abortion. Prayer in public schools. Gay marriage…But for Prothero, that’s not quite how it works. As he takes his readers through America’s long history of impassioned debate.” - Sojourners

“During these frustrating primary-election days, Prothero’s illuminating take on our current hot issues gives us hope that we can move beyond political extremism, with no side having a legitimate sole claim on American values. Liberty will be the ultimate victor, ‘making an imperfect nation a little less imperfect.’” - Bay Area Reporter

“This book deserves the highest rating and should be read by legislators, religious leaders, those involved in today’s culture wars, as well as informed citizens everywhere.” - Voice of Reason

“Prothero explains the seemingly inexplicable by mapping the enduring DNA of conservatism. The consistent - and losing - proposition in conservative thinking, Prothero argues, is a cultural one. The right, he writes, always ‘has fought for a more restrictive understanding of the American family’ and who may join in its rights.” - WBUR

“Well worth reading. . . . Prothero’s historical arguments are insightful, revealing how culture wars are rarely as sudden-appearing as they seem but are often rooted in the last generation’s quarrels.” - Russell Moore, from The Gospel Coalition