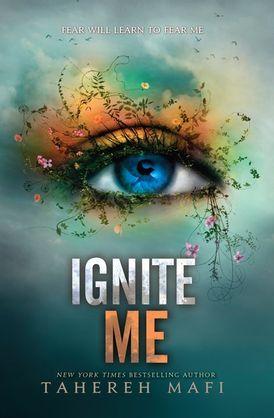 With Omega Point destroyed, Juliette doesn't know if the rebels, her friends, or even Adam are alive. But that won't keep her from trying to take down The Reestablishment once and for all. Now she must rely on Warner, the handsome commander of Sector 45. The one person she never thought she could trust. The same person who saved her life. He promises to help Juliette master her powers and save their dying world . . . but that's not all he wants with her.

The Shatter Me series is perfect for fans who crave action-packed young adult novels with tantalizing romance like Divergent by Veronica Roth, The Hunger Games by Suzanne Collins, and Legend by Marie Lu. Tahereh Mafi has created a captivating and original story that combines the best of dystopian and paranormal and was praised by Publishers Weekly as "a gripping read from an author who's not afraid to take risks."

Don’t miss Defy Me, the shocking fifth book in the Shatter Me series!

“Addictive, intense, and oozing with romance. I couldn’t put it down.” - Lauren Kate, #1 New York Times bestselling author of the Fallen series

“Mafi unveils the tragic effects of war; these revelations, along with the high-octane battles and a narrative that traces the growing empowerment of her characters, bring this trilogy to a strong and blazing finish.” - Shelf Awareness on Ignite Me

“IGNITE ME really does ignite all five of your senses. It blows your mind and makes you hungry for more of its amazing characters. It will completely blow your expectations; Tahereh Mafi truly knows how to deliver!” - Teenreads.com

“Rip-roaring adventure and steamy romance scenes, with a relationship teens will root for as much as they did for Bella and Edward. Inventive touches propel the story, such as strikeouts that reveal Juliette’s inner thoughts. The final chapters leave Juliette, Adam, and Warner well poised for round two.” - Booklist on Shatter Me

“Mafi combines a psychological opener with an action-adventure denouement in her YA debut. This is a gripping read from an author who’s not afraid to take risks.” - Publishers Weekly on Shatter Me

“The story and character arcs are glorious and well thought out. Tahereh Mafi has proved herself a masterful plotter and storyteller.” - New York Journal of Books

“Fans of Cashore’s Fire, Oliver’s Delirium, and, yes, Twilight will find this addictive.” - Bulletin of the Center for Children’s Books on Shatter Me

“Teens will feel satisfied yet wait impatiently for more.” - School Library Journal on Shatter Me

“Ready for round two? The war between the Reestablishment and its citizens is ramping up in this sequel to the steamy dystopia Shatter Me. Fans will be thrilled with the secrets unveiled in this one.” - Booklist on Unravel Me

“It’s time for war in the edge-of-your seat sequel to Tahereh Mafi’s dystopian Shatter Me. Mafi creates characters that readers feel invested in. The lyricism of the first book carries over in this installment.” - Shelf Awareness on Unravel Me

“Compelling and bittersweet.” - Bulletin of the Center for Children’s Books on Unravel Me

“Juliette’s experiences will keep readers on the edge of their seats, and the romantic tug-of-war will entrance them.” - School Library Journal on Unravel Me

Tahereh Mafi is the New York Times bestselling author of the Shatter Me series which has been published in over 30 languages around the world. She was born in a small city somewhere in Connecticut and currently resides in Santa Monica, California, with her husband, Ransom Riggs, fellow bestselling author of Miss Peregrine's Home For Peculiar Children, and their young daughter. She can usually be found overcaffeinated and stuck in a book.