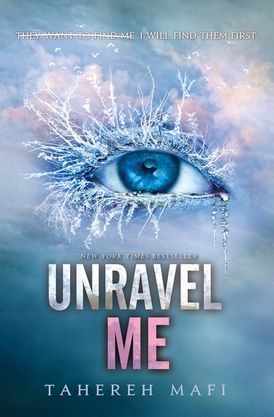 It should have taken Juliette a single touch to kill Warner. But his mysterious immunity to her deadly power has left her shaken, wondering why her ultimate defense mechanism failed against the person she most needs protection from.

She and Adam were able to escape Warner’s clutches and join up with a group of rebels, many of whom have powers of their own. Juliette will finally be able to actively fight against The Reestablishment and try to fix her broken world. And perhaps these new allies can help her shed light on the secret behind Adam’s—and Warner’s—immunity to her killer skin.

Juliette’s world is packed with high-stakes action and tantalizing romance, perfect for fans of the Red Queen series by Victoria Aveyard and the Darkest Minds trilogy by Alexandra Bracken.

Ransom Riggs, #1 New York Times bestselling author of Miss Peregrine's Home for Peculiar Children, raved: "A thrilling, high-stakes saga of self-discovery and forbidden love, the Shatter Me series is a must-read for fans of dystopian young-adult literature—or any literature!"

PRAISE FOR UNRAVEL ME: “The world of Unravel Me is terrifying and unique; its characters steam with passion, and Tahereh Mafi’s bold, inventive prose crackles with raw emotion.” — Ransom Riggs, #1 New York Times bestselling author of Miss Peregrine's Home for Peculiar Children

“Unravel Me is dangerous, sexy, romantic, and intense. I dare you to stop reading.” — Kami Garcia, #1 New York Times bestselling coauthor of the Beautiful Creatures series

“The story and character arcs are glorious and well thought out. Tahereh Mafi has proved herself a masterful plotter and storyteller.” — NY Journal of Books

“Juliette’s experiences will keep readers on the edge of their seats, and the romantic tug-of-war will entrance them.” — School Library Journal

“Ready for round two? The war between the Reestablishment and its citizens is ramping up in this sequel to the steamy dystopia Shatter Me. Fans will be thrilled with the secrets unveiled in this one.” — Booklist

“It’s time for war in the edge-of-your seat sequel to Tahereh Mafi’s dystopian Shatter Me. Mafi creates characters that readers feel invested in. The lyricism of the first book carries over in this installment.” — Shelf Awareness

“Compelling and bittersweet.” — Bulletin of the Center for Children’s Books

PRAISE FOR SHATTER ME: &#8220Addictive, intense, and oozing with romance. I’m envious. I couldn’t put it down.” — Lauren Kate, #1 New York Times bestselling author of the Fallen series

“Rip-roaring adventure and steamy romance scenes, with a relationship teens will root for as much as they did for Bella and Edward. Inventive touches propel the story, such as strikeouts that reveal Juliette’s inner thoughts. The final chapters leave Juliette, Adam, and Warner well poised for round two.” — Booklist

“Fans of Cashore’s Fire, Oliver’s Delirium, and, yes, Twilight will find this addictive.” — Bulletin of the Center for Children’s Books

“Mafi combines a psychological opener with an action-adventure denouement in her YA debut. This is a gripping read from an author who’s not afraid to take risks.” — Publishers Weekly

Tahereh Mafi is the <i>New York Times</i> bestselling author of the Shatter Me series which has been published in over 30 languages around the world. She is also the author of <i>A Very Large Expanse of Sea</i> which has received rave reviews. She was born in a small city somewhere in Connecticut and currently resides in Santa Monica, California, with her husband, Ransom Riggs, fellow bestselling author of <i>Miss Peregrine's Home For Peculiar Children</i>, and their young daughter. She can usually be found overcaffeinated and stuck in a book. You can find her online.