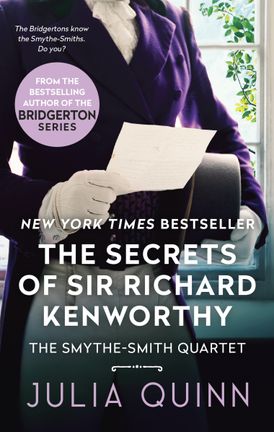 Sir Richard Kenworthy has less than a month to find a bride. He knows he can't be too picky, but when he sees Iris Smythe-Smith hiding behind her cello at her family's infamous musicale, he thinks he might have struck gold. She's the type of girl you don't notice until the second—or third—look, but there's something about her, something simmering under the surface, and he knows she's the one.

Iris Smythe–Smith is used to being underestimated. With her pale hair and quiet, sly wit she tends to blend into the background, and she likes it that way. So when Richard Kenworthy demands an introduction, she is suspicious. He flirts, he charms, he gives every impression of a man falling in love, but she can't quite believe it's all true. When his proposal of marriage turns into a compromising position that forces the issue, she can't help thinking that he's hiding something . . . even as her heart tells her to say yes.

“Quinn brings her signature style and wit to yet another late-Regency romance, with some character favorites fans have met before… Charmingly romantic, with compelling edges of dark conflict and sexual tension.” - Kirkus Reviews (starred review) on THE SUM OF ALL KISSES

“[A] wild romp... There’s witty banter, a colorful cast of characters and enough secrets and scandals to keep the gossip-mongers happy. A great, entertaining read.” - RT Book Reviews on THE SUM OF ALL KISSES

“[A]n unstoppable romp that sparkles with enough hilarious situations, over-the-top characters, and laugh-out-loud dialog to keep the chuckles coming long after the book is closed. A lovely tale that is just plain fun!” - Library Journal on THE SUM OF ALL KISSES

“[Q]uintessential Quinn: witty, whimsical, and wonderfully romantic.” - Booklist on THE SUM OF ALL KISSES

“RITA Award-winning Quinn wraps up her Smythe-Smith quartet in splendid fashion as she once again successfully marries sparkling wit with seductive passion to create another swoon-worthy love story.” - Booklist (starred review) on THE SECRETS OF SIR RICHARD KENWORTHY

“Witty, sexy, and often quite funny…a heartwarming story that won’t disappoint.” - Library Journal on THE SECRETS OF SIR RICHARD KENWORTHY

“There’s humor, sensuality and poignancy blended in perfect amounts into a plot that twists the marriage-of-convenience theme in ways that are sure to intrigue readers.” - RT Book Reviews on THE SECRETS OF SIR RICHARD KENWORTHY

“This is the last volume in the delightful Smythe-Smith Quartet, a series that highlights Julia Quinn’s inimitable mix of charm, wit and breathtaking romance.” - NPR on THE SECRETS OF SIR RICHARD KENWORTHY

The Lady Most Likely...