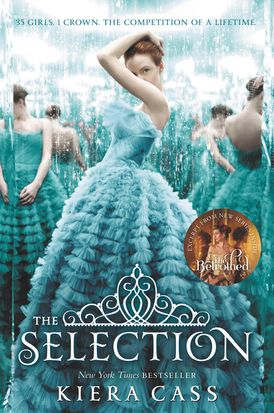 Prepare to be swept into a world of breathless fairy-tale romance, swoonworthy characters, glittering gowns, and fierce intrigue perfect for readers who loved Divergent, Delirium, or The Wrath & the Dawn.

For thirty-five girls, the Selection is the chance of a lifetime. The opportunity to escape a rigid caste system, live in a palace, and compete for the heart of gorgeous Prince Maxon. But for America Singer, being Selected is a nightmare. It means turning her back on her secret love with Aspen, who is a caste below her, and competing for a crown she doesn’t want.

Then America meets Prince Maxon—and realizes that the life she’s always dreamed of may not compare to a future she never imagined.

“An engrossing tale reminiscent of Shannon Hale’s Princess Academy and Ally Condie’s Matched. Fairy-tale lovers will lose themselves in America’s alternate reality and wish that the next glamorous sequel were waiting for them.” - School Library Journal

“Cass’s immensely readable debut novel is a less drastic Hunger Games, with elaborate fashion and trappings. The fast-paced action will have readers gasping for the upcoming sequel.” - Booklist