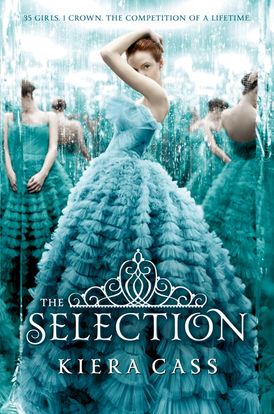 Prepare to be swept into a world of breathless fairy-tale romance, swoonworthy characters, glittering gowns, and fierce intrigue perfect for readers who loved Divergent, Delirium, or The Wrath & the Dawn.

For thirty-five girls, the Selection is the chance of a lifetime. The opportunity to escape a rigid caste system, live in a palace, and compete for the heart of gorgeous Prince Maxon. But for America Singer, being Selected is a nightmare. It means turning her back on her secret love with Aspen, who is a caste below her, and competing for a crown she doesn’t want.

Then America meets Prince Maxon—and realizes that the life she’s always dreamed of may not compare to a future she never imagined.

“An engrossing tale reminiscent of Shannon Hale’s Princess Academy and Ally Condie’s Matched. Fairy-tale lovers will lose themselves in America’s alternate reality and wish that the next glamorous sequel were waiting for them.” - School Library Journal

“Cass’s immensely readable debut novel is a less drastic Hunger Games, with elaborate fashion and trappings. The fast-paced action will have readers gasping for the upcoming sequel.” - Booklist

Kiera Cass graduated from Radford University with a degree in History. She grew up in South Carolina and currently lives in Blacksburg, Virginia with her family. In her spare time, Kiera enjoys reading, dancing, making videos and eating unhealthy amounts of cake. You can learn more about Kiera at kieracass.com, follow her on twitter via @kieracass, and see her silly videos at YouTube.com/user/kieracass.