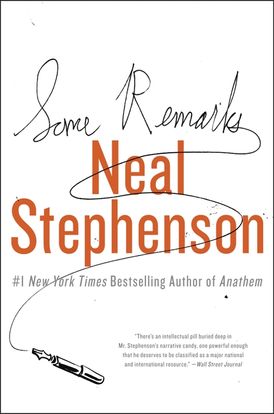 #1 New York Times bestselling author Neal Stephenson is, quite simply, one of the best and most respected writers alive. He’s taken sf to places it’s never been (Snow Crash, Anathem). He’s reinvented the historical novel (The Baroque Cycle), the international thriller (Reamde), and both at the same time (Cryptonomicon).

Now he treats his legion of fans to Some Remarks, an enthralling collection of essays—Stephenson’s first nonfiction work since his long essay on technology, In the Beginning…Was the Command Line, more than a decade ago—as well as new and previously published short writings both fiction and non.

Some Remarks is a magnificent showcase of a brilliantly inventive mind and talent, as he discourses on everything from Sir Isaac Newton to Star Wars.

Neal Stephenson is the author of Seveneves, Reamde, Anathem; the three-volume historical epic the Baroque Cycle (Quicksilver, The Confusion, and The System of the World); Cryptonomicon, The Diamond Age, Zodiac and the iconic Snow Crash, named one of Time magazine's top one hundred all-time best English-language novels. He lives in Seattle, Washington.

Nicole Galland is the author of six previous novels: Stepdog, Godiva, I, Iago, Crossed, Revenge of the Rose, and The Fool's Tale.