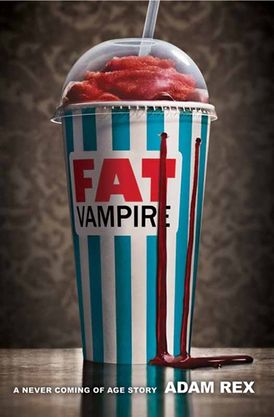 Doug Lee is undead quite by accident—attacked by a desperate vampire, he finds himself cursed with being fat and fifteen forever. When he has no luck finding some goth chick with a vampire fetish, he resorts to sucking the blood of cows under cover of the night. But it's just not the same.

Then he meets the new Indian exchange student and falls for her—hard. Yeah, he wants to bite her, but he also wants to prove himself to her. But like the laws of life, love, and high school, the laws of vampire existence are complicated—it's not as easy as studying Dracula. Especially when the star of Vampire Hunters is hot on your trail in an attempt to boost ratings. . . .

Searing, hilarious, and always unexpected, Fat Vampire is a satirical tour de force from one of the most original writers of fiction today.

The title says it all in this delightfully macabre spoof on the current vampire craze. Rex sustains the wonderfully dry humor and calculated silliness and then surprises the reader with a thoughtful, poignant, ambiguous ending that is bound to inspire discussion. — Booklist

“Surprising, funny, and poignant. The ending hits the reader’s heart like a stake and lingers long in the mind—the best kind of undead.” — Washington Post

“A rather haunting exploration of what it means to come of age in a media-saturated culture…. An intriguing reconsideration of the vampire theme.” — Bulletin of the Center for Children’s Books

Adam Rex is the author of many books, including Cold Cereal and Unlucky Charms, the first two books in the Cold Cereal Saga; the New York Times bestselling picture books The Legend of Rock Paper Scissors and Frankenstein Makes a Sandwich; the middle grade novel The True Meaning of Smekday (now a major motion picture from Dreamworks, Home); and the teen novel Fat Vampire. He lives in Arizona with his wife.

Guys Read: "What? You Think You Got It Rough?"

Guys Read: My Parents Give My Bedroom to a Biker