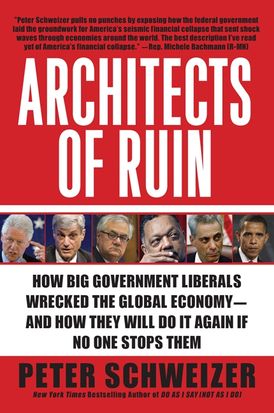 In Architects of Ruin, New York Times bestselling author and conservative historian Peter Schweizer argues that the economic crisis was caused by liberals who used the power of government to create a subprime mortgage bubble that has ravaged the global economy. Rebutting charges that the financial collapse was caused by conservative deregulatory zeal, Schweizer, the author of Do as I Say (Not as I Do): Profiles in Liberal Hypocrisy, shows that it was actually the result of “do-good capitalism.”

Praise for DO AS I SAY, NOT AS I DO: “A spirited attack on lefty icons.” — New York Times

“An entertaining exposure . . . In a series of 11 profiles on leftist icons from Noam Chomsky and Al Franken to Hillary Clinton and Ted Kennedy, Schweizer reveals that the most vocal liberals do not practice what they preach.” — Weekly Standard 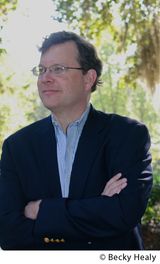 PETER SCHWEIZER is a research fellow at the Hoover Institution, Stanford University, and he is the founder and director of the Government Accountability Institute. He has written for the New York Times, Wall Street Journal, Newsweek/Daily Beast, and elsewhere. His books include Throw Them All Out, which exposed congressional insider stock trading and led to the passage of the STOCK Act.