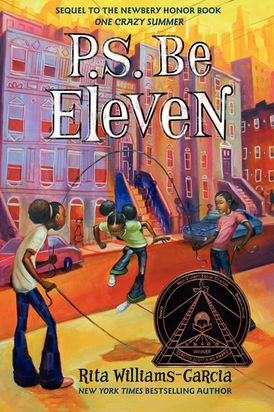 The Gaither sisters are at it again! A sequel to the Newbery Honor Book One Crazy Summer, this Coretta Scott King Award-winning novel will find a home in the hearts of readers who loved Brown Girl Dreaming and As Brave as You.

After spending the summer in Oakland, California, with their mother and the Black Panthers, Delphine, Vonetta, and Fern arrive home with a newfound streak of independence. That doesn't sit well with Big Ma, who doesn't like the way things are changing.

Neither does Delphine. Pa has a new girlfriend. Uncle Darnell comes home from Vietnam, but he's not the same. And her new sixth-grade teacher isn't the fun, stylish Miss Honeywell—it's Mr. Mwila, a stern exchange teacher from Zambia.

But the one thing that doesn't change during this turbulent year is the advice that Delphine receives from her mother, who reminds her not to grow up too fast. To be eleven while she can.

Readers who enjoy Christopher Paul Curtis's The Watsons Go to Birmingham and Jacqueline Woodson’s Brown Girl Dreaming will find much to love in this book. Rita Williams-Garcia's books about Delphine, Vonetta, and Fern can also be read alongside nonfiction explorations of American history such as Jason Reynolds's and Ibram X. Kendi's books.

Each humorous, unforgettable story in this trilogy follows the sisters as they grow up during one of the most tumultuous eras in recent American history, the 1960s. Read the adventures of eleven-year-old Delphine and her younger sisters, Vonetta and Fern, as they visit their kin all over the rapidly changing nation—and as they discover that the bonds of family, and their own strength, run deeper than they ever knew possible.

“The Gaither sisters are an irresistible trio. Williams-Garcia excels at conveying defining moments of American society from their point of view.” —Publishers Weekly (starred review)

“This thoughtful story, told with humor and heart, rings with the rhythms and the dilemmas of the ‘60s through characters real enough to touch.” — Kirkus Reviews (starred review)

“Funny, wise, poignant, and thought-provoking, this will leave readers wanting more about Delphine and her sisters.” — Horn Book (starred review)

“..the Gaither sisters are an irresistible trio. Williams-Garcia excels at conveying defining moments of American society from their point of view—this is historical fiction that’s as full of heart as it is of heartbreak.” — Publishers Weekly (starred review)

“P.S. Be Eleven is a must-read for fans of the first book, but it can also stand alone as an engrossing novel that will leave readers pondering important issues of race, gender, and identity.” — School Library Journal (starred review)

PRAISE FOR ONE CRAZY SUMMER: “In One Crazy Summer Williams-Garcia presents a child’s-eye view of the Black Panther movement within a powerful and affecting story of sisterhood and motherhood. — Monica Edinger, writing in The New York Times

PRAISE FOR ONE CRAZY SUMMER: “One Crazy Summer is a genuine rarity: a book that is both important in its contents and utterly engaging in its characters…with the tremendous bonus of being beautifully written.” — Linda Sue Park, Newbery Medal–winning author of A Single Shard

Praise for P.S. BE ELEVEN: “P.S. Be Eleven is a must-read for fans of the first book, but it can also stand alone as an engrossing novel that will leave readers pondering important issues of race, gender, and identity.” — School Library Journal (starred review)

PRAISE FOR ONE CRAZY SUMMER: “Delphine is the pitch-perfect older sister, wise beyond her years, an expert at handling her siblings...while the girls are caught up in the difficulties of adults, their resilience is celebrated and energetically told with writing that snaps off the page” — Kirkus Reviews (starred review)

PRAISE FOR ONE CRAZY SUMMER: “Regimented, responsible, strong-willed Delphine narrates in an unforgettable voice, but each of the sisters emerges as a distinct, memorable character, whose hard-won, tenuous connections with their mother build to an aching, triumphant conclusion.” — Booklist (starred review)

PRAISE FOR ONE CRAZY SUMMER: “The setting and time period are as vividly realized as the characters, and readers will want to know more about Delphine and her sisters after they return to Brooklyn...” — Horn Book (starred review)