The Hidden Forces That Shape Our Decisions 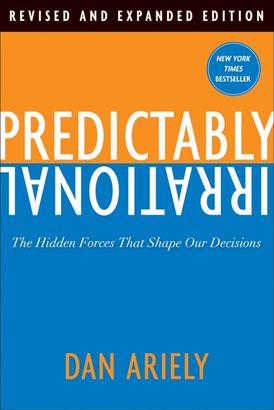 The Hidden Forces That Shape Our Decisions

"Ariely not only gives us a great read; he also makes us much wiser."
—George Akerlof, 2001 Nobel Laureate in Economics

Why do our headaches persist after we take a one-cent aspirin but disappear when we take a fifty-cent aspirin? Why do we splurge on a lavish meal but cut coupons to save twenty-five cents on a can of soup?

When it comes to making decisions in our lives, we think we're making smart, rational choices. But are we?

In this newly revised and expanded edition of the groundbreaking New York Times bestseller, Dan Ariely refutes the common assumption that we behave in fundamentally rational ways. From drinking coffee to losing weight, from buying a car to choosing a romantic partner, we consistently overpay, underestimate, and procrastinate. Yet these misguided behaviors are neither random nor senseless. They're systematic and predictable—making us predictably irrational.

“This is a wonderful, eye-opening book. Deep, readable, and providing refreshing evidence that there are domains and situations in which material incentives work in unexpected ways. We humans are humans, with qualities that can be destroyed by the introduction of economic gains. A must read!” — Nassim Nicholas Taleb, New York Times bestselling author of The Black Swan: The Impact of the Highly Improbable

“A fascinating romp through the science of decision-making that unmasks the ways that emotions, social norms, expectations, and context lead us astray.” — Time magazine

“In creative ways, author Dan Ariely puts rationality to the test. . . . New experiments and optimistic ideas tumble out of him, like water from a fountain.” — Boston Globe

“An entertaining tour of the many ways people act against their best interests, drawing on Ariely’s own ingeniously designed experiments. . . . Personal and accessible.” — BusinessWeek

“A spry treatise on how the world works and how we spend our money based on other people’s rules. . . . Ariely has a brilliant solution to a problem that is very real . . . Make a point of seeing this book. That way you’ll know you want it, and you will.” — Kirkus Reviews (starred)

“Inventive. . . . An accessible account. . . . Ariely is a more than capable storyteller . . . If only more researchers could write like this, the world would be a better place.” — Financial Times

“A taxonomy of financial folly.” — The New Yorker

“A marvelous book that is both thought provoking and highly entertaining, ranging from the power of placebos to the pleasures of Pepsi. Ariely unmasks the subtle but powerful tricks that our minds play on us, and shows us how we can prevent being fooled.” — Jerome Groopman, New York Times bestselling author of How Doctors Think

“Dan Ariely is a genius at understanding human behavior: no economist does a better job of uncovering and explaining the hidden reasons for the weird ways we act, in the marketplace and out. PREDICTABLY IRRATIONAL will reshape the way you see the world, and yourself, for good.” — James Surowiecki, author of The Wisdom of Crowds

“PREDICTABLY IRRATIONAL is a charmer-filled with clever experiments, engaging ideas, and delightful anecdotes. Dan Ariely is a wise and amusing guide to the foibles, errors, and bloopers of everyday decision-making.” — Daniel Gilbert, Professor of Psychology, Harvard University and author of Stumbling on Happiness

“The most difficult part of investing is managing your emotions. Dan explains why that is so challenging for all of us, and how recognizing your built-in biases can help you avoid common mistakes.” — Charles Schwab, Chairman and CEO, The Charles Schwab Corporation

“PREDICTABLY IRRATIONAL is wildly original. It shows why—much more often than we usually care to admit—humans make foolish, and sometimes disastrous, mistakes. Ariely not only gives us a great read; he also makes us much wiser.” — George Akerlof, Nobel Laureate in Economics, 2001 Koshland Professor of Economics, University of California at Berkeley

“Dan Ariely’s ingenious experiments explore deeply how our economic behavior is influenced by irrational forces and social norms. In a charmingly informal style that makes it accessible to a wide audience, PREDICTABLY IRRATIONAL provides a standing criticism to the explanatory power of rational egotistic choice.” — Kenneth Arrow, Nobel Prize in Economics 1972, Professor of Economics Stanford University

“A delightfully brilliant guide to our irrationality—and how to overcome it—in the marketplace and everyplace.” — Geoffrey Moore, author of Crossing the Chasm and Dealing with Darwin

“After reading this book, you will understand the decisions you make in an entirely new way.” — Nicholas Negroponte, founder of MIT's Media Lab and founder and chairman of the One Laptop per Child non-profit association

“PREDICTABLY IRRATIONAL is a scientific but imminently readable and decidedly insightful look into why we do what we do every day...and why, even though we ‘know better,’ we may never change.” — Wenda Harris Millard, President, Media, Martha Stewart Living Omnimedia

“Freakonomics held that people respond to incentives, perhaps in undesirable ways, but always rationally. Dan Ariely shows you how people are deeply irrational, and predictably so.” — Chip Heath, Co-Author, Made to Stick, Professor, Stanford Graduate School of Business

Dan Ariely is the bestselling author of Predictably Irrational, The Upside of Irrationality, and The (Honest) Truth About Dishonesty. He is the James B. Duke Professor of Psychology and Behavioral Economics at Duke University and is the founder of the Center for Advanced Hindsight. His work has been featured in the New York Times, the Wall Street Journal, the Washington Post, the Boston Globe, and elsewhere. He lives in North Carolina with his family.

Other Works by Dan Ariely