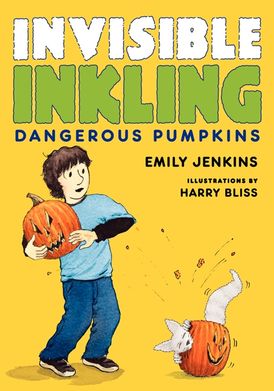 It’s Halloween in Emily Jenkins’s Dangerous Pumpkins, the second title in the chapter-book series about a Brooklyn fourth grader and his invisible furry pal.

Hank Wolowitz hates Halloween. Every year his older sister, Nadia, scares him half to death. But Hank’s invisible bandapat, Inkling, loves Halloween. Pumpkins are his favorite food. Hank has serious trouble stopping Inkling from devouring every jack-o’-lantern in their neighborhood, including the ones his sister carves. And that’s not his only problem: Will he ever figure out a cool costume? Will he finally get to pick the holiday flavor in his family’s ice-cream shop? Will Hank ever get revenge on Nadia?

“Gentle humor and a realistic urban setting add interest to this solid middle-grade read. Appealing any time of the year.” - Kirkus Reviews

“Jenkins’s chapter book fantasy, with its strong sense of place and realistic family dynamic, will have new readers wishing for an invisible pal of their own. Bliss’s droll illustrations allow readers to see Inkling in all his furry glory, even when the characters in the book do not.” - The Horn Book

“The Halloween details, from giant eyeballs to black spiderwebs, in Bliss’ wry, spot drawings add to the farce, and kids will appreciate both the conflicts and Hank’s warm bond with his bossy sidekick.” - Booklist 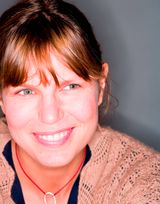 Emily Jenkins is the author of two previous books about Hank and Inkling. She also wrote the chapter books Toys Go Out, Toy Dance Party, and Toys Come Home, plus a lot of picture books, including Lemonade in Winter, That New Animal, and Skunkdog. She bakes excellent pumpkin bread and, when swimming, wears a purple swim cap and blue goggles.

Other Works by Emily Jenkins

New York Times bestselling artist Harry Bliss is a cartoonist and cover artist for the New Yorker magazine. He is the author and illustrator of Bailey and Luke on the Loose and the illustrator of A Fine, Fine School by Sharon Creech, Which Would You Rather Be? by William Steig, Diary of a Worm by Doreen Cronin, and Louise, The Adventures of a Chicken by Kate DiCamillo. His self-titled single panel gag cartoon Bliss appears in newspapers internationally. He lives in New Hampshire. You can visit him online at www.harrybliss.com.

Other Works by Harry Bliss

Diary of a Worm

Diary of a Fly

Diary of a Worm: Nat the Gnat

Louise, The Adventures of a Chicken

Diary of a Worm: Teacher's Pet

Diary of a Spider