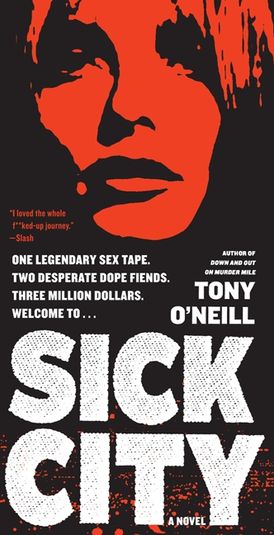 “Sick City is fun, twisted and brutal….O’Neill could be our generation’s Jim Thompson.”
— James Frey, author of Bright Shiny Morning

“Tony O’Neill works his L.A. people the way Dutch Leonard had his hand down the pants of every degenerate in his great Detroit novels.”
— Barry Gifford, author of Wild at Heart

From Tony O’Neill, the author of Down and Out on Murder Mile and coauthor of the Neon Angel and the New York Times bestselling Hero of the Underground, comes Sick City—a wild adventure of two junkies, Hollywood, and the Sharon Tate sex tape. Readers of Elmore Leonard (Get Shorty) and Irvine Welsh (Trainspotting) will take great delight in Sick City, “a disturbingly twisted ride through Hollywood’s underbelly with a degenerate cast of colorfully interwoven characters” (Slash).

“Like the bastard child of Dashiell Hammett and Evelyn Waugh....With Sick City, Tony O’Neil confirms his comic voice....If dark humor, punk sensibility, literary sophistication and pointed satire are among your addictions, you should find Sick City a rewarding read.” — The Rumpus.net

“What Sick City does is takes the grit and grime of, say, Naked Lunch by William Burroughs and makes it coherent…within the context of a caper novel, as imagined by Elmore Leonard….Sick City makes Jim Thompson’s novels look like Little Golden Books.” — Bookreporter.com

“You may feel disturbed by this very realistic account of addicts on a mission.” — CurledUp.com

“[An] inspired comedy of errors…a post-punk crack at Hollywood’s legacy that’s funnier than its predecessor, and just as cringe-inducing…infused with enough black humor to make Bill Burroughs choke on his apple” — Kirkus Reviews

“Like a Robert Altman film scripted by Charles Bukowski and William S. Burroughs...Sick City is appealing in its unsentimentalism, disgusting in its details--and, almost unbelievably, funny.” — Booklist

“Sick City is a disturbingly twisted ride through Hollywood’s underbelly with a degenerate cast of colorfully interwoven characters. I loved the whole f**ked up journey.” — Slash

“Sick City is fun, twisted and brutal. One of the best books written about LA in a long time. O’Neill could be our generation’s Jim Thompson.” — James Frey, author of Bright Shiny Morning

“Tony O’Neill works his L.A. people the way Dutch Leonard had his hand down the pants of every degenerate in his great Detroit novels. Cover your ears, ladies; thanks to O’Neill, the cries of pain can be heard from one sick city to another. Just use your eyes.” — Barry Gifford, author of Wild at Heart

“Addictive Noir! Rarely do you find a novel that is both fast paced and well observed, action packed, yet high-grade poetic. Once you start it, just try putting it down.” — Arthur Nersesian, author of The F*ck Up

“Reading Tony O’Neill is like traveling downhill in a car with no lights at terrific speed and driven by a four-year-old child on meth. The signposts along the way are all marked ‘Nowhere.’” — Sebastian Horsley, author of Dandy in the Underworld

“I f**king loved it -- the piss-soaked floors, the vomit-impastoed car interiors, the groans and grunts from every room. It’s like some weirdly loveable purgatory.” — Tom McCarthy, author of Remainder

“Tony O’Neill writes about the Hollywood I know as well as any writer alive. His characters are a punch in the face, scorchingly real. His dialogue is note-perfect.” — Dan Fante, author of 86'd

Tony O'Neill is the author of Digging the Vein and Down and Out on Murder Mile, and the coauthor of Neon Angel and the New York Times bestseller Hero of the Underground. He lives in New York with his wife and daughter.

Other Works by Tony O'Neill

Down and Out on Murder Mile