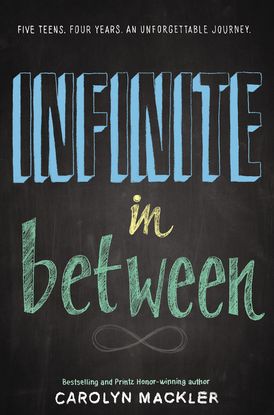 The Breakfast Club meets Boyhood in this striking young adult novel from Printz Honor author Carolyn Mackler, which chronicles the lives of five teenagers through the thrills, heartbreaks, and joys of their four years in high school.

"Characters live, grow, and ultimately come of age in a beautifully constructed world,” raved Kirkus in a starred review.

Zoe, Jake, Mia, Gregor, and Whitney meet at freshman orientation. At the end of that first day, they make a promise to reunite after graduation. But so much can happen in those in-between years. . . .

Zoe fears she will always be in her famous mother’s shadow. Jake struggles to find the right connections in friendship and in love. Mia keeps trying on new identities, looking for one that actually fits. Gregor thought he wanted to be more than just a band geek. And Whitney seems to have it all, until it’s all falling apart around her.

Carolyn Mackler skillfully brings the stories of these five disparate teens together to create a distinct and cohesive whole—a novel about how we can all affect one another’s lives in the most unexpected and amazing ways.

Infinite in Between received four starred reviews, was listed on several best books of the year lists, and is perfect for fans of books by Jandy Nelson, Sara Zarr, and E. Lockhart.

PRAISE FOR INFINITE IN BETWEEN: “Elevated by both the humanity of the characters and the intricate ways that they weave in and out of each other’s lives. Characters live, grow, and ultimately come of age in a beautifully constructed world.” - Kirkus Reviews (starred review)

“The author expertly illustrates how all moments, little or huge, have an impact on who we are. A wonderfully written peek into adolescence gushing with relatability.” - School Library Journal (starred review)

“No one writes more honestly and empathetically about teenage lives than Carolyn Mackler. She doesn’t write teens as adults want them to be; she writes teens as they are.” - Gabrielle Zevin, bestselling author of The Storied Life of A.J. Fikry

“The Infinite In Between will leave you aching for all the changes that come in high school, and grateful to the true-blue friends who get you through.” - Katie Cotugno, author of How to Love

“A clear, true portrait of life as it is for many teenagers.” - ALA Booklist

“Carolyn Mackler has created a new way to tell the story of high school. The grand journey here is a great one. I highly recommend you check out Infinite in Between. There’s a lot to love and a lot to learn from her characters.” - Hypable

“Mackler’s attention to some of the more realistic, mundane details of young-adulthood sets this story apart.” - Examiner.com

“Make it not end! I *loved* reading about Jena, Dakota, Skye, and Owen. I loved getting a peek into their messy, juicy, miserable, wonderful lives, and I loved being reminded that existence itself is all about the tangling of souls.” - Lauren Myracle, New York Times bestselling author of Shine

“Carolyn Mackler is a remarkably astute observer of human frailties and hearts. In four interlocking tales of redemption and romance, she reminds us why we’re alive and what we might mean to one another if we’d only reach out.” - E. Lockhart, author of The Disreputable History of Frankie Landau-Banks

“Well, there goes your weekend. You’ve just picked up Carolyn Mackler’s TANGLED. Cancel your plans. You’re not going to want to be anywhere else.” - Daniel Handler, New York Times bestselling author of Why We Broke Up

“Brimming with girl appeal and emotionally generous… deftly demonstrate[s] that people aren’t always who they seem to be.” - Kirkus Reviews

“Mackler expertly creates believable characters, plots, and settings. The various viewpoints weave together to create a compelling and cohesive whole. A story that begs for discussion.” - School Library Journal

“The often–hilarious story, which takes place over a four-month period, builds in poignant layers as each character narrates in a fresh, frank voice that defies stereotype. Their insecurities, desires, and questions about family, self–worth, and first love are timeless.” - ALA Booklist 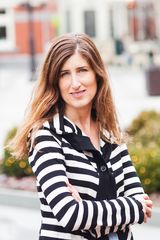 Carolyn Mackler is the author of the award-winning teen novels The Earth, My Butt, and Other Big Round Things, a Michael L. Printz Honor Book; The Future of Us, coauthored with Jay Asher; Tangled; Love and Other Four-Letter Words; Vegan Virgin Valentine; and Guyaholic. She lives in New York City with her husband and two sons.

Other Works by Carolyn Mackler