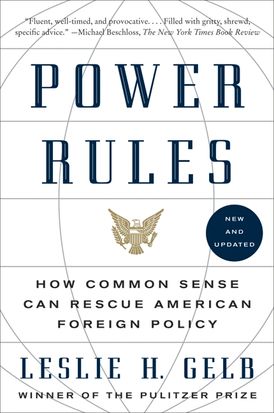 “Few Americans know the inner world of American foreign policy—its feuds, follies, and fashions—as well as Leslie H. Gelb. . . . Power Rules builds on that lifetime of experience with power and is a witty and acerbic primer.” — The New York Times

Power Rules is the provocative account of how to think about and use America’s power in the world, from Pulitzer Prize winner Leslie H. Gelb, one of the nation’s leading foreign policy minds and practitioners.

“Few Americans know the inner world of American foreign policy—its feuds, follies, and fashions—as well as Leslie H. Gelb. . . . Power Rules builds on that lifetime of experience with power and is a witty and acerbic primer.” — Michael Ignatieff, The New York Times

“Power Rules provides a much-needed antidote to the ideological fevers that have ravaged American statecraft in recent years. Leslie Gelb’s reflections on power, its effective use, and its limitations are shrewd, trenchant, and refreshingly devoid of either cant or partisanship.” — Andrew Bacevich

“Les Gelb, one of America’s most distinguished practitioner-observers of foreign policy, brilliantly explains how a series of administrations weakened our nation’s security, and shows how we can reverse this trend. . . . Power Rules is an indispensable book for the new era.” — Richard Holbrooke

“Lively. . . . Power Rules is worth the read. . . . Gelb’s career embodies big and powerful Washington, with all its turf battles, crises, and war stories.” — The Washington Post

“Les Gelb tells it like it is: making US foreign policy and using American power are common sense, not rocket science. Incisive and thoroughly compelling, Power Rules is rich in colorful stories as well as in sound advice for our president and our people.” — Brent Scowcroft

“Leslie Gelb has as much experience in foreign policy as anyone alive. Unlike most writers in this field, he isn’t afraid to use plain language and say what he means. And he doesn’t mind making powerful enemies.” — George Packer

“This book is a must-read not just for President Obama, but for anyone who wants to understand how the new administration can improve its odds of strategic success.” — Jacob Weisberg

“An excellent primer for those seeking a common-sense approach to foreign policy. . . . Gelb’s informative and well-crafted analysis is filled with rules for wielding power and goals worth striving for globally.” — The Boston Globe

“Fluent, well-timed, provocative. . . . Gelb’s ruminations are welcome and stimulating. . . . Filled with gritty, shrewd, specific advice on foreign policy ends and means that will be especially useful for a new president and secretary of state without deep experience dealing with the world.” — Michael Beschloss, The New York Times Book Review

“Gelb has raised an essential question: Will Obama know how, and whether, to react if diplomacy fails? . . . Gelb takes a defiant step away from gimmicks and grand theories, toward a re-examination of the most basic and eternal tool in the game of nations.” — Joe Klein, Time

“Compared to the piles of books being churned out about America’s place in the world, Power Rules belongs in the top tier. Gelb intended this book as a long letter to President Obama; I fervently hope that the intended recipient reads it carefully.” — The National Interest

“Power Rules gets the new rules right. . . . Gelb skillfully weaves the current tapestry of global events into the history of what brought us here.” — BusinessWeek 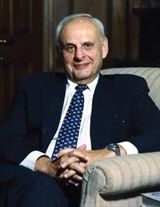 Leslie H. Gelb is President Emeritus of the Council on Foreign Relations and a former columnist at The New York Times, where he was awarded a Pulitzer Prize for Explanatory Journalism. Gelb has worked as a senior official in the State and Defense departments. He lives in New York City.