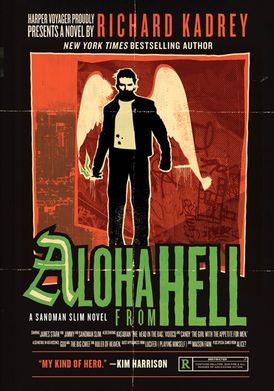 “Sandman Slim is my kind of hero.”
—Kim Harrison

All hail Sandman Slim, author Richard Kadrey’s ultra-extreme anti-hero and recent escapee from Lucifer’s overheated Underworld playground. Legendary author William Gibson (Neuromancer) called Kadrey’s first deliciously twisted Slim adventure “an addictively satisfying, deeply amusing, dirty-ass masterpiece,” and in number three, Aloha from Hell, the ruthless avenger, a.k.a. Stark, finds himself trapped in the middle of a war between Heaven and Hell. With God on vacation, the Devil nosing around in Paradise, and an insane serial killer doing serious damage on Earth, Stark/Slim is ready to unleash some more adrenaline-surging, edgy and violent supernatural mayhem—and even pay another visit to Hell if necessary—which is great news for fans of Jim Butcher, Warren Ellis, Charlaine Harris, Kim Harrison, and Simon R. Green.

“I hope Kadrey keeps putting out Sandman Slim books for the next 20 years. They’re that much fun to read.” - Wired

“Kadrey’s prose is raw and gutter-tough, Raymond Chandler meets Lux Interior at the Whisky a Go Go at the end of days.” - Austin Chronicle

“This bad-ass supernatural horror stuff is clearly the material he was born to write. Kadrey has an ungodly (literally) amount of fun with Stark’s wryer-than-wry and violenter-than-violent observations and dialog.” - Cory Doctorow, Boing Boing

“Full of action, wit, and suspense, this grabbed a hold of me and wouldn’t let go. Kadrey is a master storyteller (overused, I know, but very apt) and he will have you rooting for him in Hell and on Earth.” - Suspense magazine

“Kadrey knows how to spin a story, his prose is crisp and effortless, and the entertainment value is high.” - Charles de Lint, Fantasy & Science Fiction on Kill the Dead

“The perfect escapist storyline … side-splittingly funny. … gruesome slapstick mixed with down-and-dirty Hammett-esque mayhem and double-dealing. … If you’ve been hoping someone would bring the full-strength SoCal toxic waste to the urban fantasy game, then Sandman Slim is your poison.” - io9.com

“If authors were tarot cards, Richard Kadrey would unarguably be the Hierophant of Paranormal Fantasy.” - Paul Goat Allen

“…endlessly inventive and high-octane…Kadrey’s an excellent writer who’s able to juggle all of it without dropping a single pin.” - Locus

“Everything a sequel should be; that is, more. … There’s hardly a moment where you’re not chewing your fingernails to the wrist wondering what happens next. … Kadrey is a hell of a writer, versatile and seasoned, and these pulpy, dark, ultraviolent novels are his best work yet.” - Cory Doctorow, Boing Boing

“Witty, gritty, over-the-top mayhem to care. If you mixed Jim Butcher with Christopher Moore, forced a kicking and screaming Warren Ellis in after them, and shook well, you’d get . . . well, I’d be careful opening the mixer. But the result wouldn’t be too far away from this.” - Daytona Beach News

“Hilarious … belongs up there with Dresden Files and Felix Castor novels. … some of the best supernatural buddy comedy ever created. ... This is that rare sequel that’s actually better than the first book (which was plenty great) and manages to take several leaps forward.” - io9.com

If you like your horror stories with a little camp, a little quirkiness and a whole lot of blood and gore then Kill The Dead: A Sandman Slim Novel by Richard Kadrey will be right up your alley. - Las Vegas Review Journal

“If Simon R. Green wrote an episode of Dog the Bounty Hunter, it would read much like Sandman Slim – violent, vivid, non-stop action of the supernatural kind. I couldn’t put it down.” - Charlaine Harris

“Dirty, disgusting, vulgar, violent, poisonously testosterone-driven, so politically incorrect it ought to be prosecuted, and generally all-round offensively in your face. … I loved it. It’s amazing.” - Robin McKinley

“A sharp-edged urban fantasy, drenched in blood and cynicism, tipping its hat to Sam Peckinpah, Raymond Chandler and the anti-heroes of Hong Kong cinema. Kadrey brings it off through the propulsive force of Stark’s in-your-face, first-person, present-tense narration. It’s a bravura performance.” - San Francisco Chronicle

“Nicotine and octane in equal parts might come close to the high-energy buzz from Richard Kadrey’s Sandman Slim. Crisp world building, recognizable and fully-realized characters, and a refreshingly unique storytelling style make for an absorbing read.Sandman Slim is my kind of hero.” - Kim Harrison

“The most hard-boiled piece of supernatural fiction I’ve ever had the pleasure of reading. … all confident and energetic and fresh and angry. I loved this book and all its screwed-up people.” - Cory Doctorow

“Kadrey combines humor and horror to create a lively, scary tale of urban warfare with plenty of gory action in Kill The Dead.’ - Deseret News

“Sandman Slim is one of the best books I have read in a very, very long while. Richard Kadrey is a genius. I read it on the plane ride home and was totally blown away.” - Holly Black

“Paced like greased lightning (watch out for friction burns on your turning finger), blend the movie-ish delights of tough guy noir and such smart-mouthgore-fests as “Reanimator” and “Army of Darkness”, seasoned by soupcons of Gaimanian romanticism and Koontzian sentiment.” - Booklist

“Kadrey’s tale lives on a tightrope, but the author nails the right balance of detective fiction and theological fantasy, seriousness and humor, pathos and absurdity.” - Lincoln Star Journal

“Kadrey really is the anti-Twilight. Raw, real, funny, furious, all full of piss and hemoglobin. His third Sandman Slim novel, in which the supernatural anti-hero must go back to Hell to stop a war with Heaven, may be his finest.” - Fearnet