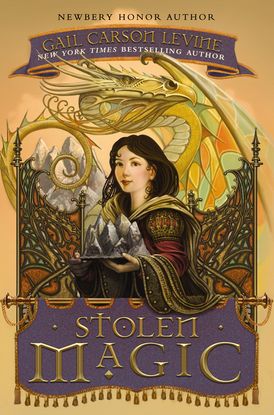 The Newbery Honor author of Ella Enchanted, Gail Carson Levine, weaves a thrilling tale of mystery in this companion to A Tale of Two Castles.

Elodie, the dragon detective Meenore, and the kindly ogre Count Jonty Um are all on their way to Elodie’s home island of Lahnt.

Elodie has barely set foot on land before she learns that the Replica, a statue that keeps her island’s deadly volcano from erupting, has been stolen! If the Replica isn’t found in three days, a mountain will be destroyed. And when Elodie ends up alone with a cast of characters that may all be guilty, she has to use her wits to try to unravel a tangled web of lies.

New York Times bestselling author Gail Carson Levine has written an imaginative, fast-paced mystery that will be enjoyed by fans of A Tale of Two Castles, as well as those meeting Elodie, Meenore, and Count Jonty Um for the first time.

“Levine’s prose is clear and accessible, and her invented world, with its quirky inhabitants and distinctive vocabulary, is pleasantly unpredictable and nonthreatening-even with a volcanic eruption in the offing.” - Horn Book Magazine

The writing is consistently engaging, and the story’s deliberate pace will encourage kids to observe the characters and solve the mystery before all is revealed. A satisfying mixture of fantasy, mystery, and adventure. - Booklist

here is plenty of adventure and mystery to engage readers, and fans of Levine’s other works will be pleased to see this in the collection. - School Library Journal

Praise for A Tale of Two Castles: “A thoroughly delicious romp from the author of Ella Enchanted. The plot is winningly unpredictable, the characters easy to relate to, the humor subtle and the action well-paced. Newbery Honor-winner Levine has once again breathed new life into old stories.” - Kirkus Reviews (starred review)

Praise for A Tale of Two Castles: “Readers are certain to be pulled, like Elodie herself, right into the midst of the rich and swirling life of Two Castles.” - School Library Journal

Praise for A Tale of Two Castles: “Levine’s strength lies in her transparent language and the candid, uncomplicated voice of her narrator, who brings younger readers along with her as she questions assumptions, grows in friendship, works out the mystery, and makes brave escapes.” - The Horn Book

Praise for Ella Enchanted: “This refreshing take on one of the world’s most popular fairy tales preserves the spirit of the original but adds plenty of humorous twists and a spunky, intelligent female lead.” - Kirkus Reviews (starred review)

Praise for Ella Enchanted: “As finely designed as a tapestry, with a heroine so spirited that she wins readers’ hearts.” - Booklist (starred review)

Praise for Ever: “The power of love and courage to overcome seemingly impossible odds and to bridge ostensibly untraversable differences are at the heart of this compelling, intensely satisfying fantasy.” - School Library Journal (starred review)

Praise for Fairest: “Readers will instantly fall in love with the heroine, whose heart proves to be as warm as her voice.” - Publishers Weekly (starred review)

Praise for Fairest: “Readers will enjoy the fairy-tale setting while identifying with the real-life problems of living in an appearance obsessed society. A distinguished addition to any collection.” - School Library Journal (starred review) 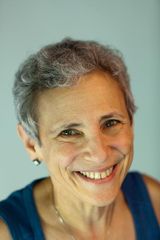 Gail Carson Levine's first book for children, Ella Enchanted, was a Newbery Honor Book. Levine's other books include Ever, a New York Times bestseller; Fairest, a Best Book of the Year for Publishers Weekly and School Library Journal, and a New York Times bestseller; Dave at Night, an ALA Notable Book and Best Book for Young Adults; The Wish; The Two Princesses of Bamarre; A Tale of Two Castles; and the six Princess Tales books. She is also the author of the nonfiction books Writing Magic: Creating Stories That Fly and Writer to Writer: From Think to Ink, as well as the picture books Betsy Who Cried Wolf and Betsy Red Hoodie. Gail Carson Levine and her husband, David, live in a two-centuries-old farmhouse in the Hudson Valley of New York State.

Other Works by Gail Carson Levine

The Two Princesses of Bamarre

Cinderellis and the Glass Hill

A Ceiling Made of Eggshells

The Lost Kingdom of Bamarre