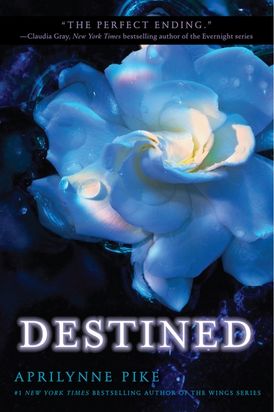 Destined delivers all the romance and action that fans expect as it brings Aprilynne Pike’s Wings series to a deeply satisfying conclusion.

Laurel used to think she was an ordinary girl from Crescent City, California. She never would have believed she was truly a faerie from a realm called Avalon.

Now Laurel must risk her life to save Avalon from destruction by Yuki—a rare and powerful Winter faerie—and troll-hunter Klea. But Laurel won’t have to fight alone; David and Tamani, two boys she loves in different ways, will be by her side, along with her best friend, Chelsea.

Readers of the Need and Graceling series will want to follow Laurel’s story from its beginning in Wings to its heart-stopping end in Destined.

PRAISE FOR DESTINED: “The greatest part: the WINGS series reaches the perfect ending. The worst part: it has to end!” — Claudia Gray, New York Times bestselling author of the Evernight series

“Pike’s clever and innovative way of reinventing fairy tales and myths to make them her own is wonderful. The story is rich in vivid details, action, adventure, and romance.” — Romantic Times (Top Pick, 4 1/2 stars)

“In this last installment of the Wings series, destinies and betrayals are unearthed at breathtaking speed. The series is action-packed, and the final chapters of the story are no exception. A thrilling page-turner, many readers will read the book cover-to-cover, barely daring to breath.” — Voice of Youth Advocates (VOYA) (starred review)

Aprilynne Pike has been spinning stories since she was a child with a hyperactive imagination. She completed her BA in creative writing at the age of twenty at Lewis-Clark State College in Lewiston, Idaho. Aprilynne currently lives with her husband and children in Arizona.

Other Works by Aprilynne Pike