How One Solution Can Fix Our Two Biggest Problems 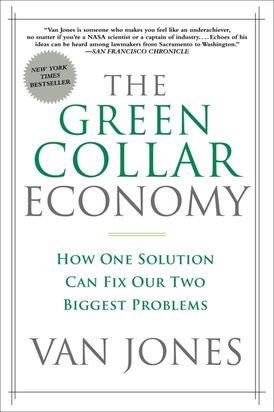 How One Solution Can Fix Our Two Biggest Problems

“Steadily—by redefining green—Jones is making sure that our planet and our people will not just survive but also thrive in a clean-energy economy.”
—Leonardo DiCaprio

A New York Times bestseller, The Green Collar Economy by award-winning human rights activist and environmental leader Van Jones delivers a much-needed economic and environmental solution to today’s two most critical problems. With a revised introduction and new afterword by the author—a man who counsels President Barack Obama on environmental policy—The Green Collar Economy and Jones have been highly praised by a multitude of leaders and legislators, including Al Gore, Senator Tom Daschle, and Speaker of the House Nancy Pelosi. Van Jones was named one of “The World’s 100 Most Influential People of 2009” by Time magazine, and with The Green Collar Economy he offers a wise, necessary, and eminently achievable plan for saving the earth and rescuing working class Americans.

“[Jones] new book -- which details how an ambitious public spending program on energy efficiency and renewable energy can stimulate the economy and create good jobs for the poor and unemployed -- couldn’t have landed at a better time.” - Washington Post

“Van Jones has a unique ability to inspire people of all colors, classes and generations to uplift vulnerable people, while protecting our vulnerable planet. His sparkling intelligence, powerful vision and deep empathy are all on full display in The Green-Collar Economy.” - Nancy Pelosi, Speaker of the House of Representatives

“The baton is passed to climate advocate Van Jones who clearly sees that our future must be green and must include everyone. His powerful new book ‘The Green Collar Economy’ shows us how to accomplish it.” - Laurie David, global warming activist

“Van Jones’ authentic and passionate arguments trump the status quo. In The Green Collar Economy he holds the welfare of our neediest people front and center as he lays out a viable plan for the remainder of the 21st century.” - Tavis Smiley, Author, Television and Radio Host

“Pay attention: we are witnessing the debut of a major American voice.” - Paul Hawken, author of Blessed Unrest

“It’s rare that someone with such a gift for speaking is able to convey the energy and excitement of his message equally well in writing. With The Green Collar Economy, Van Jones surpasses all expectations. The country seriously needs his take on the environment and the economy.” - Gavin Newsom, Mayor of San Francisco

“Van Jones reminds us that the worst of times can also be the best of times -- that a nation with an abundance of resources it’s wasting -- beginning with its youth -- has an enormous opportunity to stop foolishly bankrupting itself by chasing resources it is running out of -- like oil.” - Carl Pope, Executive Director Sierra Club

“Jones accomplishes the super heroic feat of linking together the solutions for poverty, the energy crisis, and global warming. Van is a visionary of our times, and one of my personal heroes. Every relevant 21st century leader needs to read Van’s book.” - John Hope Bryant, Founder & CEO, Operation Hope

“Once in a very long while, a truly original voice enters our national political discussion--and changes the conversation for the better. [...]Van Jones does just that. The Green Collar Economy lets us envision a world in which the Earth and everyday people both thrive.” - Senator Tom Daschle

“In The Green Collar Economy, Van Jones turns conventional environmentalism on its head. Watch out: this book could change everything.” - Larry Brilliant, Google.org

“As the Earth warms and the oceans rise, the civil and human rights agenda must expand. No one has worked harder to level the playing field in the rapidly growing green economy than Van Jones.” - Ben Jealous, President, NAACP

“In The Green-Collar Economy, Van Jones has penned a working man’s manifesto for the solar age. When green solutions finally catch on among everyday folks, Van and this book will deserve the lion’s share of the credit.” - Rev. Lennox Yearwood, Hip Hop Caucus

“The Green Collar Economy is a both a rallying call and a road map for how we can save the planet, reduce our dependency on budget-busting fossil fuels, and bring millions of new jobs to America.” - Fred Krupp, Environmental Defense Fund President and New York Times best-selling co-author of "Earth: The Sequel"

“Van Jones represents a new generation of environmental leader – one who sees the Greening of America as both a moral imperative and a nuts and bolts economic issue. His passion, intelligence, and idealism shine through every page of this must-read book.” - Arianna Huffington

“Brother Van Jones is a visionary who spells out real solutions in black and white - and, of course, green. Van’s vision of a thriving, green economy doesn’t have throw-away things or throw-away people. It’s the kind of environmentalism everyone can get behind.” - Mario Van Peebles, actor and producer, Mario's Green House

“Jones, the head of the non-profit Green For All and the author of the new book The Green-Collar Economy, could represent the future of environmentalism in America and a way for the movement to survive and even thrive through the coming recession. - Time

“In looking at the bigger picture, Jones provides ideas for rebuilding infrastructure and creating alternative energy sources, which would have the double bonus of boosting the economy through increased employment and higher wages while decreasing our dependence on fossil fuels . . . recommended for all libraries.” - Library Journal

“Van Jones is someone who makes you feel like an underachiever, no matter if you’re a NASA scientist or a captain of industry. . . . Echoes of his ideas can be heard among lawmakers from Sacramento to Washington...” - San Francisco Chronicle

“Van Jones has made a national name for himself by finding one solution to three persistent problems: poverty, racial inequality, and the environmental crisis. He wants to solve these problems by creating green jobs filled by the poor and people of color—the groups often left behind during technological advances.” - Boston Globe

“In less than two years, Jones has risen from local grass-roots organizer to shepherd of a national movement to build an inclusive green economy... Jones is making sure that our planet and our people will not just survive but also thrive in a clean-energy economy.” - Leonardo DiCaprio in Time magazine 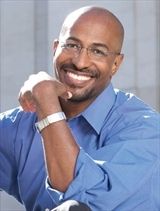 Van Jones is the founder and former president of Green For All. In March of 2009, he became the special advisor for Green Jobs at the White House Council on Environmental Quality. Van Jones lives in the Washington D.C. area with his wife and two sons.

Other Works by Van Jones

The Antarctic Book of Cooking and Cleaning

Taming the Flood: Rivers, Wetlands and the Centuries-Old Battle Against Flooding