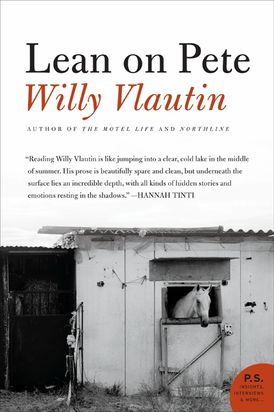 Willy Vlautin’s award-winning novel Lean on Pete, a moving and compassionate story about a fifteen-year old-boy's unlikely connection to a failing racehorse as he struggles to find a place to call home—now a major motion picture from A24, the studio behind Moonlight and Lady Bird, starring Charlie Plummer, Chloë Sevigny, with Travis Fimmel and Steve Buscemi, and directed by Andrew Haigh (45 Years, Looking).

“Lean on Pete riveted me. Reading it, I was heartbroken and moved; enthralled and convinced. This is serious American literature.”
—Cheryl Strayed, Oregonian

Fifteen-year-old Charley Thompson wants a home, food on the table, and a high school he can attend for more than part of a year. But as the son of a single father working in warehouses across the Pacific Northwest, Charley's been pretty much on his own. When tragic events leave him homeless weeks after their move to Portland, Oregon, Charley seeks refuge in the tack room of a run-down horse track. Charley's only comforts are his friendship with a failing racehorse named Lean on Pete and a photograph of his only known relative. In an increasingly desperate circumstance, Charley will head east, hoping to find his aunt who had once lived a thousand miles away in Wyoming—but the journey to find her will be a perilous one.

In Lean on Pete, Willy Vlautin reveals the lives and choices of American youth like Charley Thompson who were failed by those meant to protect them and who were never allowed the chance to just be a kid.

“The writing is spare and straightforward…There is intensity in Vlautin’s narration, and also beauty and power…Vlautin’s major accomplishment lies in posing a damning question: How could we, as a society, have allowed this to happen?” - Seattle Times

“Willy Vlautin, plumbs the depths of despair but finally rewards you with redemption.” - Sunday Mercury

“An archetypal American novel, Huck Finn for the crystal-meth generation...a sad, often brutal, but oddly beautiful portrait of an America that’s forgotten only because we choose not to remember its continuing existence.” - Independent Extra

“Willy Vlautin’s novels are clean as a bone, companionable, and profound. He is a master at paring loneliness and longing from his characters, issuing them through downturns, trials and transience without starving their humanity, and always sustaining them, and the reader, with ordinary hope.“ - Sarah Hall

“Arguably his best so far…If you like melancholy Americana Vlautin’s writing is for you.” - Bookseller (London), “Bookseller's Choice”

“Lean on Pete reminds me of the best parts of Gus Van Sant’s beautiful film My Own Private Idaho. Willy’s voice is pure and his stories universal. He never loses hope or heart and I believe every word he’s written.” - Barry Gifford

“For anyone with a sentimental attachment to beasts of an equine nature, a river of tears awaits.” - The List, UK

“The comparisons with Steinbeck and Carver are richly deserved, yet Vlautin is a truly original voice…powerful, heartbreaking stuff. Just three novels in and Vlautin is already one of the best writers in America.” - Mark Billingham

“Reading Willy Vlautin is like jumping into a clear, cold lake in the middle of summer. His prose is beautifully spare and clean, but underneath the surface lies an incredible depth, with all kinds of hidden stories and emotions resting in the shadows.” - Hannah Tinti

“Spare and unadorned, but nevertheless poetic...full of boundless compassion for the dispossessed and rootless.” - Uncut Magazine (FIVE STARS)

“Lean on Pete confirms his status as one of the most emotionally charged writers in America… Vlautin’s characters, memorable however curtailed their cameos might be, become a sketchbook of America…The band has to be a hobby now. Vlautin is a writer.” - Sunday Herald, UK

“Among my favourite novels of the year have been Willy Vlautin’s Lean on Pete which is possibly his bleakest yet.” - New Statesman, “Books of the Year”