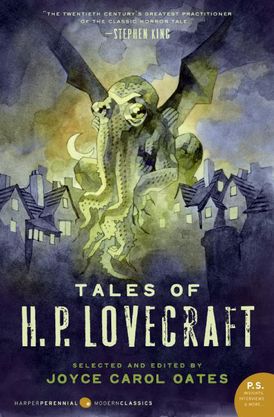 “H. P. Lovecraft has yet to be surpassed as the 20th century’s greatest practitioner of the classic horror tale.”—Stephen King

The most important tales of the godfather of the modern horror genre—a master who influenced the works of a generation of writers including Stephen King and Anne Rice—are gathered in one volume by National Book Award-winning author Joyce Carol Oates.

Combining the 19th-century gothic sensibility of Edgar Allan Poe with a daring internal vision, Lovecraft’s tales foretold a psychically troubled world to come. Set in a meticulously wrought, historically grounded New England landscape, his harrowing stories explore the collapse of sanity beneath the weight of chaotic events. Lovecraft’s universe is a frightening shadow world were reality and nightmare intertwine, and redemption can come only from below. For aficionados and a new generation of 21st-century readers , Tales of H. P. Lovecraft is a classic not to be missed.

Joyce Carol Oates is a recipient of the National Medal of Humanities, the National Book Critics Circle Ivan Sandrof Lifetime Achievement Award, the National Book Award, and the 2019 Jerusalem Prize, and has been several times nominated for the Pulitzer Prize. She has written some of the most enduring fiction of our time, including the national bestsellers We Were the Mulvaneys; Blonde, which was nominated for the National Book Award; and the New York Times bestseller The Falls, which won the 2005 Prix Femina. She is the Roger S. Berlind Distinguished Professor of the Humanities at Princeton University and has been a member of the American Academy of Arts and Letters since 1978.

I Am No One You Know