How Steroid Hypocrites, Soul-Sucking Suits, and a Worldwide Leader Not Named Bush Have Taken the Fun Out of Sports 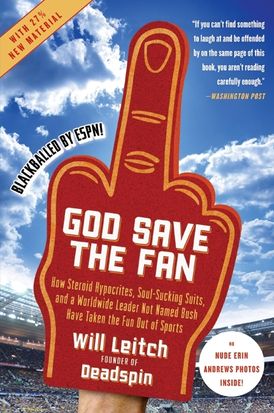 How Steroid Hypocrites, Soul-Sucking Suits, and a Worldwide Leader Not Named Bush Have Taken the Fun Out of Sports

Arch and unrepentant, Will Leitch, founding editor of Deadspin.com, is the mouthpiece for all the frustrated fans who just want their games back from big money, bloated egos, and blathering sportscasters. Always a fan first and a sportswriter second, Leitch considers the perfection of fantasy leagues and the meaninglessness of the steroids debate as he exposes Olympic fetishes, parses Shaq's rap attack on Kobe, shares a brew with John Rocker and his surprising girlfriend, and reveals what ESPN and the beer companies really think about you. If you or a fan you love is suffering from a sense of listless dissatisfaction brought on by the leagues and networks, God Save the Fan is your new manifesto.

“If you can’t find something to laugh at and be offended by on the same page of this book, you aren’t reading carefully enough.” - Washington Post Book World

“A witty poke in the eye to the entire sports-industrial complex...A fanfare for the common fan and, if you’re stuck in the cheap seats, easier to read than a website.” - Sports Illustrated

“Leitch balances potent humor with sharp and sometimes vicious insight without lapsing into clichés. He manages to be an astute sports critic while maintaining his enthusiasm as a fan, making his book an entertaining and enlightening read for anyone who roots for the home team a little too hard.” - Publishers Weekly

“If the truth is to be found in humor - and it is - then let Will Leitch lead our people’s revolution. He’s everything that’s right and funny and true in American sports.” - Jeff MacGregor, Sports Illustrated special contributor and author of Sunday Money

“The funniest sports book I have ever read. Yeah, as a member of the mainstream media I should probably despise Will Leitch. But God Saves the Fan is an uproarious, painful, pointed, skittish manifesto on all that’s warped in the world of Lucious Pusey.” - Jeff Pearlman, New York Times bestselling author of The Bad Guys Won! 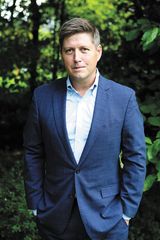 Will Leitch, founding editor of Deadspin.com, is a contributing editor and columnist for New York magazine. He has also written for the New York Times, GQ, Fast Company, Slate, Salon, and Playboy, and is the author of Catch, a novel, and Life as a Loser, a book of essays. He lives in Brooklyn, New York.

Other Works by Will Leitch

The Unwritten Rules of Golf