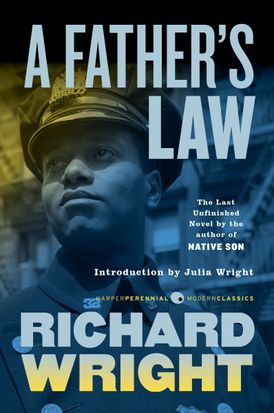 “An intense, provocative, and vital crime story that excavates paradoxical dimensions of race, class, sexism, family bonds, and social obligation while seeking the deepest meaning of the law." — Booklist

Originally published posthumously by his daughter and literary executor Julia Wright, A Father’s Law is the novel Richard Wright, acclaimed author of Black Boy and Native Son, never completed. Written during a six-week period prior to his death in Paris in 1960, it offers a fascinating glimpse into the writer’s process as well as providing an important addition to Wright’s body of work.

In rough form, Wright expands the style of a crime thriller to grapple with themes of race, class, and generational conflicts as newly appointed police chief Ruddy Turner begins to suspect his own son, Tommy, a student at the University of Chicago, of a series of murders in Brentwood Park. Under pressure to solve the killings and prove himself, Turner spirals into an obsession that forces him to confront his ambivalent relationship with a son he struggles to understand.

Prescient, raw, and powerful, A Father's Law is the final gift from a literary giant.

“We can be grateful for what [Wright] left behind and for what this book gives us to contemplate.”  — Washington Post Book World

“Wright’s masterful depiction of Turner’s states of mind and Tommy’s catalytic antagonism leads us into a vortex. . . . The novel is a summation of Wright’s aesthetic.” - Jerry W. Ward, Jr., Natchez Democrat

"A powerfully written, compelling crime novel. Richard Wright’s final work, including its moving introduction by his daughter Julia, is a fitting tribute to the centennial of this great writer’s birth. His voice, above all others, reveals the searing pain and anger of black consciousness in America." - William Ferris, University of North Carolina at Chapel Hill

“A Father’s Law is vintage Richard Wright: the emotion, the intensity, the suspense make it of a piece with Wright’s major novels and short stories. It is a gripping tale of fear, uncertainty and confusion.” - Amritjit Singh

&#8220Any undiscovered material from his illustrious career would be considered a literary treasure. . . . [From a] master of psychological torment.” - Seattle Times