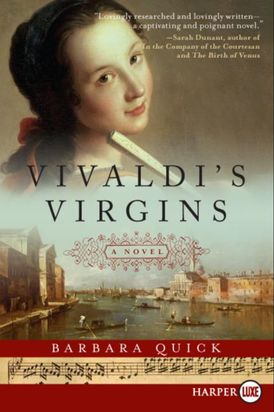 In this enthralling new novel, Barbara Quick re-creates eighteenth-century Venice at the height of its splendor and decadence. A story of longing and intrigue, half-told truths and toxic lies, Vivaldi's Virgins unfolds through the eyes of Anna Maria dal Violin, one of the elite musicians cloistered in the foundling home where Antonio Vivaldi—known as the Red Priest of Venice—is maestro and composer.

Fourteen-year-old Anna Maria, abandoned at the Ospedale della Pietà as an infant, is determined to find out who she is and where she came from. Her quest takes her beyond the cloister walls into the complex tapestry of Venetian society; from the impoverished alleyways of the Jewish Ghetto to a masked ball in the company of a king; from the passionate communal life of adolescent girls competing for their maestro's favor to the larger-than-life world of music and spectacle that kept the citizens of a dying republic in thrall. In this world, where for fully half the year the entire city is masked and cloaked in the anonymity of Carnival, nothing is as it appears to be.

A virtuoso performance in the tradition of Girl with a Pearl Earring, Vivaldi's Virgins is a fascinating glimpse inside the source of Vivaldi's musical legacy, interwoven with the gripping story of a remarkable young woman's coming-of-age in a deliciously evocative time and place.

“Quick has chosen a fascinating backdrop. Her novel shimmers.…This is a good read.” — Booklist

“A genuine successor to [Tracy Chevalier’s Girl with a Pearl Earring].” — Houston Chronicle 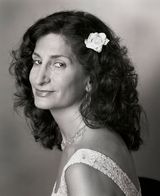 Writer and poet Barbara Quick is the author of the novels Vivaldi's Virgins and Northern Edge, winner of the Discover Prize. A Golden Web is her first book for teen readers. An avid traveler and student of other languages, she has run an international boardinghouse; written everything from self-help books to humor columns to grant requests for disadvantaged children; and done whatever jobs she needed to do -- from landscape gardening to catering to editing -- to allow her to continue writing. She lives with her teenage son, Julian, in the San Francisco Bay Area, where she takes frequent classes and occasionally performs with a Brazilian dance troupe.

Other Works by Barbara Quick