The True Story of Olimpia Maidalchini: The Secret Female Pope 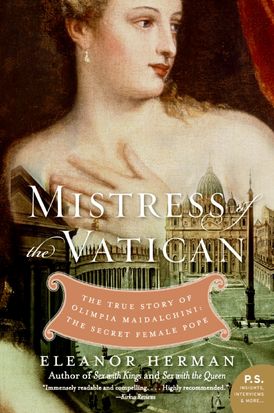 The True Story of Olimpia Maidalchini: The Secret Female Pope

For a decade in the seventeenth century a woman ran the Catholic Church, through her brother-in-law and reputed lover, Pope Innocent X. Cardinals bowed down to her and princes feted her as she made international policy, waged war, patronized Rome’s greatest baroque artists, and stuffed her pockets with Vatican gold.

Born of a humble family, at fifteen Olimpia Maidalchini was almost forced to become a nun against her will because her father could not afford a dowry. But Olimpia cleverly escaped the convent, marrying money first, and nobility second. Widowed twice, she single-handedly seated her indecisive brother-in-law on the throne of St. Peter.

Admired, hated, envied, and feared, Olimpia suffered the tragedy of being born an ambitious woman in a man’s world. She also experienced the triumph of achieving her wildest dreams, despite the bitter handicap of being female. Against all odds, Olimpia became the Mistress of the Vatican and shook the Catholic Church down to its very foundations.

Eleanor Herman, the talented author of the New York Times bestselling Sex with Kings and Sex with the Queen goes behind the sacred doors of the Catholic Church in Mistress of the Vatican, a scintillating biography of a powerful yet little-known woman whose remarkable story is ripe with secrets, sex, passion, and ambition. For almost four centuries this astonishing story of a woman’s absolute power over the Vatican has been successfully buried—until now.